EU DEMAND has absorbed the bulk of Australia’s solid 2016/17 canola export program, which is now drawing to a close as Europe’s own crop gets close to harvest.

This continues a pattern set from the start of Australia’s near-record 2016/17 canola harvest, which has seen EU take 2.8Mt Australian canola since November.

Australian Oilseeds Federation CEO, Nick Goddard, said Australian canola shipments from the start of the marketing year to the end of April at 3.2Mt from all states have accounted for a significant proportion of the total harvest of around 4.2Mt.

“We are probably starting to get towards the bottom of the silo; we have had an extremely strong export program this year,” Mr Goddard said.

Australian canola trade with EU is built on timing of Australia’s crop — harvesting and shipping from November.

It syncs on the opposite side of the cycle of EU canola, which harvests from July, so Australia has access to EU homes after our crop arrives and before the new EU crop.

Cargoes of Australian canola have discharged at European ports as distant as Liverpool, Ghent in Belgium, Montoir in France and to the north, Hamburg in Germany.  High oils created by a mild finish to the Australian growing season have added to their attractiveness in the eyes of European crushers.

There is also a component of competitive advantage gained by Australian shippers on non-GM canola if European meal sellers can sell to livestock feeders at sufficient premium.

“We are able to supply non-GM where there’s a preference.  It’s not a requirement of the market but it does help our sales into Europe,” Mr Goddard said. 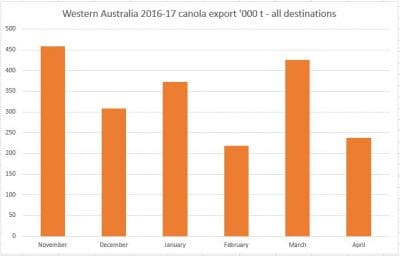 China, the world’s biggest importer of canola, is supplied mostly from western Canada, and takes around 4Mt per annum.

While China has taken up to 1Mt of Australian canola in previous years, its purchasing this year-to-date has been 119,000t.