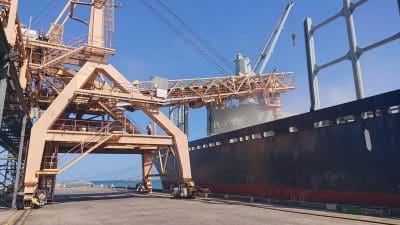 HEADY competition for Australia’s small chickpea crop has lifted prices for the pulse to highs not seen since 2016.

Traders report the market got up to AUD$1070 per tonne delivered container terminal (DCT) in the boxed market over the extended Christmas-New Year break, and US$640/t free-on-board (FOB) in the bulk market.

The FOB market rose from around $570/t from August through to October, when the Central Queensland (CQ) crop was being harvested.

Central Queensland looks likely to be the origin for all of Australia’s bulk chickpea exports this year in two cargoes, both bound for Bangladesh ahead of the Ramadan period which starts in April.

The second, 40,000t put together by ADM and Agrocorp/Associated Grain, is loading on the MV Pacific Light this week.

It is thought to be the biggest chickpea shipment ever to go out of Mackay, and is loading tonnage which has arrived by road and rail.

A March shipment of 15,000t from both Gladstone and Mackay has been booked by GrainCorp, with the vessel yet to be nominated.

Total bulk chickpea shipments out of CQ could therefore be as high as 90,000t, down slightly from earlier estimates, as the container market has pulled significant volumes south for shipment out of Brisbane.

Around 150,000t of the desi chickpea crop was grown last year in CQ, which has supplied nearly all the product to container packers on the Darling Downs in Queensland’s south, and in Brisbane.

Along with discounted old-crop chickpeas coming out of storage in New South Wales and Queensland, tonnage harvested in CQ last year is supplying the container-only Pakistan market as it stocks up ahead of Ramadan.

Pakistan’s own crop is in good shape thanks to recent rain and is on track to be harvested in late March and April, but will not be available in significant volume until after Ramadan.

“Both Pakistan and India have had a big planting of chickpeas, and now there has been widespread rain, Pakistan’s demand is much softer,” Sydney-based GrainTrend and Pulse Australia director Sanjiv Dubey said.

Time is also playing a part in easing demand now that Pakistan’s orders are filling and the closing of the shipment window approaches.

“Anything up to February shipment will arrive in time for Ramadan, and anything after that is too late.

“Pakistan doesn’t want product arriving when its own harvest is happening.”

Associated Grain accumulator Patrick O’Hara at Dalby said CQ growers could be holding up to 10,000t of current-crop on farm, and a further 5000t would be held over to plant the next crop.

A few thousand tonnes may have gone into the feed market as it struggles through the drought.

“The new-crop DCT market hit its high earlier this month, but bids have become sporadic and are now at $1000,” Mr O’Hara said.

The Australian trade’s supply-and-demand estimates say up to 50,000t of current-crop chickpeas, nearly all from CQ, will be shipped out of Brisbane by March, mostly to Pakistan.

Ramadan-drive demand is also thought to have cleaned out any grower stocks of chickpeas held over from the 2018 and 2019 crops.

“We haven’t got anything much left now.”

Bangladesh has become a major buyer of Australian desi chickpeas.

Agrocorp Singapore-based senior trader Abhishek Agrawal said Bangladesh has an annual demand of around 200,000-225,000t per annum, of which 70-75 per cent is being supplied by Australia.

“Other major suppliers of desi chickpeas to Bangladesh are India, Myanmar and Tanzania, but Aussie desis have an advantage and are preferred because of their quality and timely availability, with new-crop right before Ramadan.”

Mr Agrawal said chickpeas were the most widely consumed pulse in Bangladesh, and flour and dhal accounted for around 70pc of use.

India is traditionally Australia’s biggest chickpea market, and the effect of its continued absence from the market as it consumes its own crop has been tempered by the small crops coming out of Australia’s drought-hit regions.

While Australia often exports desi chickpeas from Newcastle and Sydney, drought has decimated production in NSW and much of southern Queensland to a maximum 10,000t in each region.