GROWTH in Australian pulse and grain exports to India is likely to continue in line with the country’s growing population and the percentage of protein in the average diet.

This growth is expected to eclipse the overall impact of tariff changes and weather. 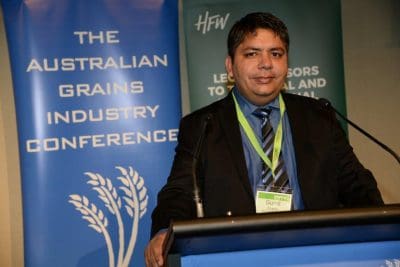 That was a key message at the Australian Grains Industry Conference in Melbourne where McDonald Pelz Global Commodities business manager, Sumit Gupta, discussed how demographic changes are altering the nature of the Indian market.

“The protein percentage in the diet of the Indian consumer is going up, and we expect this increase to come mainly from pulses,” Mr Gupta said.

Also spurring demand was the growing number of mouths to feed in India, where annual population growth at 1.76 per cent was around 10 times that of Australia.

“Annual growth in production of pulses in India is 0.8pc, less than half that of population growth.”

First for chickpeas, second for wheat

Ms van Meurs said pulses and grains had been “the real success story” for Australian agricultural exports to India.

“There has been a 500 per cent growth from five years ago in agricultural commodities exports from Australia to India including pulses, cotton, wool, almonds, wheat and paper,” Ms van Meurs said.

“Australia exported A$50 million worth of peas, $180m of lentils, and over $1 billion in chickpeas last financial year.

“The future is also bright for Indian demand for agricultural products, which is expected to continue to grow strongly, outstripping growth in Indian production.”

The Indian Government historically has used policy measures such as minimum support prices (MSP) and tariffs to moderate domestic pulse and grain prices, but both speakers pointed to changing tastes, and a growing and increasingly urban population, underpinning an uptrend in grain and pulse consumption.

“India gets impacted by the El Nino weather pattern the same as Australia, as it affects the monsoon adversely.

“During the El Nino which has happened in the past two years, production goes down significantly and we (India) can become a net importer.

“In La Nina years we might rebuild stocks and be an exporter.”

Between October 2016 and March 2017, and prior to the reintroduction of a tariff on imported wheat, India bought 1.5 million tonnes of Australian wheat.

India’s buying of Australian chickpeas has been a massive supporter of prices through out 2016/17, and continuing demand has bolstered prices for new-crop also.