A CARGO of desi chickpeas loading this week at the Queensland port of Gladstone and bound for Bangladesh is expected to be the last bulk shipment from Australia’s 2018 chickpea crop. 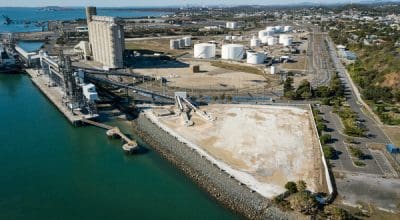 A cargo of chickpeas bound for Bangladesh is loading at the Port of Gladstone this week. Photo: Gladstone Ports Corporation

At around 220,000 tonnes, it was the smallest crop by far in recent years because of drought in Queensland and northern New South Wales where the bulk of Australia’s chickpeas are grown.

“The peas were bought some months ago, and this will be the last one for the time being,” COFCO trader Rob Brealey said.

In February, Graintrend, along with some other exporters, loaded 18,500 tonnes of chickpeas in Mackay bound for Bangladesh as the only other new-crop shipment of the pulse out of Central Queensland (CQ).

“There is not enough quantity from CQ for another vessel, and no bulk chickpeas have gone out of Brisbane or Newcastle from last year’s crop,” Graintrend director Sanjiv Dubey said.

The total desi crop is thought to have totalled as little as 150,000t, compared with the bumper 2016 crop of more than 1 million tonnes.

Despite dry conditions and some frost damage, CQ produced around 60,000-70,000t of chickpeas last year, close to double what southern Queensland and northern NSW combined produced.

CQ’s two bulk shipments, plus some tonnage road-freighted south for container export out of Brisbane, are thought to have reduced its unsold surplus to a few thousand tonnes at most.

The NSW crop was so small it offered minimal tonnage for containerised export.

“Out of Sydney, there are hardly any containers going out.”

Current-crop chickpeas are currently bid at around $650 per tonne delivered Downs, and new-crop is being bid at similar levels.

Anzac Day normally marks the start of Australia’s chickpea-planting period, with CQ the first region to kick off the seeding program, while the Liverpool Plains can plant chickpeas as late as early July.

Due to the strong demand for cereals in up-country NSW and southern Queensland from the feed and human-consumption markets, chickpea area is likely to down sharply this year.

In CQ, a similar chickpea area to that planted last year is expected to go in in coming week, as most of the region has had good planting rain, and growers will want to stick to their rotations where possible.