THE INITIAL forecast for Australia’s canola crop of 2.57 million tonnes (Mt) appears to have more downside than upside, which is being reflected in grower reluctance to forward sell tonnage because they have production concerns, and hold hopes for higher prices. 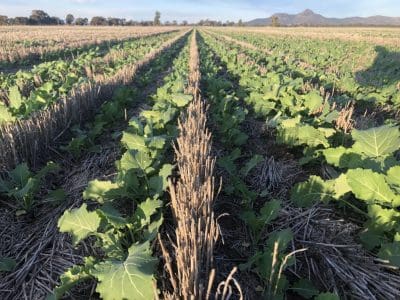 This Wahoo canola crop sown on 17 April at Yerong Creek in southern NSW is one of the state’s best performers to date. Photo: Pontara Grain

A tightening global supply, based largely on dry conditions in Canada, as well as increased domestic demand from GrainCorp’s expanded Numurkah plant, are also feeding into price ideas being more bullish than bearish.

ABARES released its new-crop forecast last week, and put the crop now in the ground at 18 per cent above the crop grown last year which yielded 2.18Mt from 3.89M hectares (Mha).

“If we get a poor spring, the current estimate is optimistic, and the market will keep its weather premium until we get some clarity about production,” Wilken Grain Warracknabeal-based trader Andrew Kelso said.

“People are uncertain about rainfall. Victoria and South Australia have had a reasonable amount, but New South Wales needs more, and rain was late in parts of Western Australia.

“The late break has pushed wheat and barley back into the rotations.”

The latest Bureau of Meteorology outlook points to a winter with little chance of exceeding median rainfall.

“With the dry forecast, we’re not going to get much forward selling.”

Drought last year in eastern Australia reduced exports out of Victorian ports to a minimum, and precluded any bulk shipments from NSW, where domestic crushers and stockfeed demand consumed the state’s disappointingly small crop.

It also saw shipments of canola from Australia’s two major exporting states, WA and SA, feed into the east coast.

In its May canola supply-and-demand report, Lachstock Consulting said export pace had slowed, with around 120,000t of WA canola available to be shipped, and which might end up sitting in genetically modified carryout if export demand was not forthcoming.

Lachstock has estimated Australian transhipments to eastern states at 75,000t of the expected 300,000t required to fill the local shortfall. 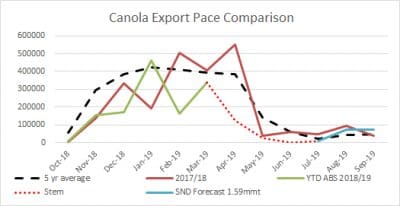 However, reduced European production may increase demand for any surplus Australian seed.

Despite a forecast increase in the Ukraine crop, European production overall is forecast to fall to 17.4Mt from a potential 18.1Mt seen earlier, and dry conditions and frost in Canada have reduced its forecast production to 19.3Mt from 20.1Mt.

“Overall, balance is certainly shifting to a tight global canola situation for 2019-20,” Lachstock said, adding there were “some big caveats” around Chinese demand, EU policy, and Canada’s ability to push large volumes of seed into the EU.

“The market’s well supported because it won’t stop raining in the US, and it hasn’t started in Canada, and the French have cut their estimate for canola area too.”

Rain in the US has delayed the planting and establishment of the US soybean crop, and prices have rallied accordingly.

This has tempered the impact of the China-US trade dispute which is reducing Chinese interest in US soybeans, and also diminished Chinese demand as a result of the African swine fever outbreak which has reduced its pig herd, a major consumer of exported soybeans.