THE value of Australia’s farm production is forecast to remain relatively unchanged at $60 billion in 2018–19, well above the 10-year average of $55b, despite very dry conditions in some places, according to ABARES’ Agricultural Commodities: September quarter 2018 report released today. 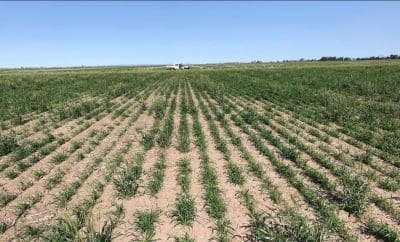 A cereal crop in Moree in northwest NSW shows the effects of late germination rain and little moisture since.

“The value of crop production is forecast to decline by 3 per cent to $30b in 2018–19, reflecting a 12 per cent fall in the volume of winter crop production nationally, especially in drought-affected cropping regions in New South Wales and Queensland,” Dr Hatfield-Dodds said.

“Offsetting this lower volume we are expecting higher prices for canola, coarse grains, cotton and wheat, and a favourable exchange rate will result in a much smaller decline in the value of production, and help maintain returns to Australian exporters.”

Based on tightened supply, the commodities forecaster said indicative world prices for wheat and coarse grains were expected to rise 9 per cent and 12pc respectively in 2018-19.

In cotton, returns to Australian growers have been forecast to hit a 16-year high, and are expected to climb 2pc in 2018-19 based on growing global demand and lower production.

The world oilseed price has been forecast to climb 3pc over 2018-19, with canola prices expected to rise in response to higher Chinese demand and reduced production in Australia and Canada.

“A warmer winter has supported the production of a range of fruits and vegetables, and sugar and winegrape production have not been significantly affected by the drought.”

Livestock production is expected to increase 2pc to $30b in 2018–19, driven by increased supply of livestock as farmers destock in response to scarce pasture and rising feed costs.

“Relatively high world prices for meat are providing some support for cattle prices in Australia, but we are expecting cattle prices to fall by around 9pc from the historically high levels of recent years.

“As we’ve seen, rising input costs are a significant challenge for some producers and we can expect increased competition in export markets as more cattle are turned off in the United States in response to dry conditions there.

Total export earnings are forecast to drop 5pc from $49b to $45b, largely due to reduced exports of canola, coarse grains, and wheat, and an increased domestic demand for grain.

“These declines will be offset by a rise in export earnings for lamb, mutton, rice, cotton and cheese, due to strong global demand resulting from an increase in global economic growth.” 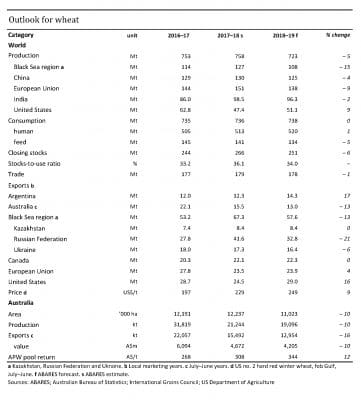 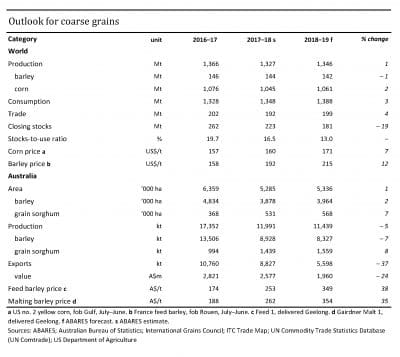 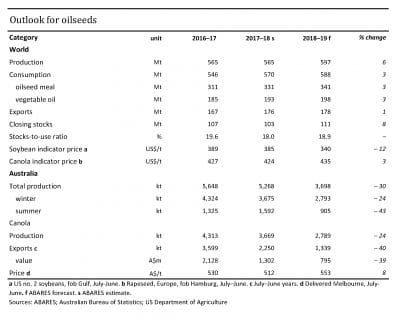 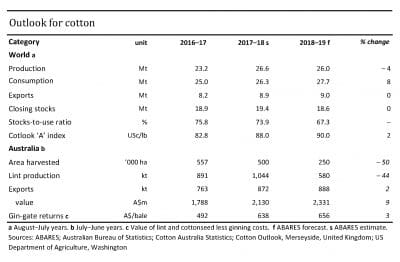 Performance and forecasts for major agriculture, fisheries and forestry industries.

The full analysis can be found at agriculture.gov.au/ag-commodities-report.