THE US Government’s shutdown of non-essential services has had the global grain market holding its breath ahead of the February World Agricultural Supply and Demand Estimates (WASDE) report.

Released by the USDA on Friday, the figures filled the gap left by the absence of the January monthly report, and were met in some trade circles, perhaps unfairly, with a yawn.

China’s 2018-19 wheat imports estimate was cut to 3.5Mt, 500,000t below USDA’s December estimate, but China’s consumption of wheat was seen as 2Mt higher at 125Mt, indicative of greater usage of local production.

Wheat futures markets barely shifted on Friday after the 11am US central time release of the reports.

US Soft Red Winter (SRW) wheat remained the cheapest wheat in the world and price-wise it still calculated into virtually all destinations.

Drought, and the high internal grain prices it has supported, deposed Australia from its position as the world’s biggest exporter of barley.

With 9Mt shipped in 2016 and 6Mt in 2017, Australia had been the biggest global supplier of barley in recent years, with the EU in second place at a little under 6Mt in both years.

USDA trimmed world barley exports to 27Mt in its February estimate, the top seven exporters being the EU on 5.3Mt, Australia on 5Mt,  Russia on 4.7Mt, Ukraine on 4.2Mt, Argentina on 3.1Mt, Canada and 2.2Mt, and Kazakhstan on 2Mt.

A substantial cut in China’s 2018/19 barley imports, 8Mt in the February estimates compared with 9.2Mt in the December, was partially offset by higher import projections for Saudi Arabia, 8.5Mt compared with 8Mt in December estimate.

Brazil’s soybean stocks were heavy reduced following its record export year in 2017/18, and its smaller crop this year would have a knock-on to export availability this year and next.

World oilseed production was forecast 593Mt, of which soybeans comprised 361Mt.  USDA’s December estimates had been 600Mt and 369Mt respectively, the decline mainly attributable to Brazil’s 2018/19 soybean crop being cut by 5Mt from 122Mt to 117Mt. 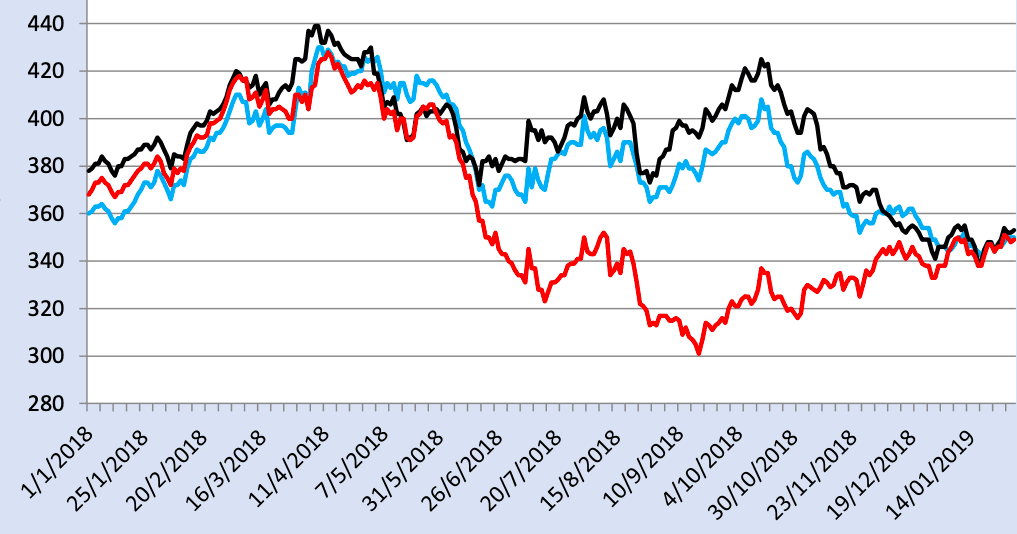