INDIA has raised its tariff on imported wheat to 40 per cent from 30pc as policy-makers factor a bumper winter crop, including wheat, into the equation as the country’s general election period nears its end on 19 May. 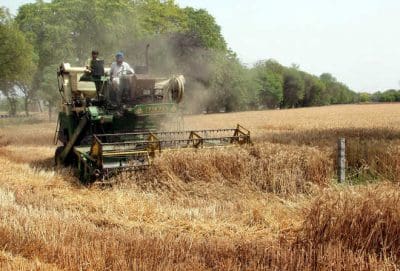 Harvesting wheat in the Indian state of Punjab. Photo: RCF

The move is seen as part of Prime Minister Narendra Modi’s pitch at rural voters, who are noticing an impact on pulse and grain prices from large stocks carried over from last year year, and big tonnages hitting the market now that the rabi-crop harvest is well advanced.

Announced on Thursday by the Indian Government, the tariff hike is not expected to win any votes from India’s flour millers in coastal cities, who like to blend some imported wheat with local tonnage.

Market Check head of strategy Nick Crundall said the tariff hike would have no impact on Australian markets this season.

“This is hardly surprising, considering the decent crop India has just harvested, plus the limited size of our exportable surplus.”

Mr Crundall said the duty had the potential to have a greater impact in the coming marketing year if Australia returned to producing an average or above-average crop in 2019.

“That being said, it’s also not unusual for India to amend its import-duty structures depending on their domestic-supply situation.

“Although their most recent crop is big, if their new crop later this year and early next year struggles, that 40pc duty will be reduced to incentivise imports again.”

According to the USDA’s India: Feed and Grain Annual report released last month is forecast to harvest 94 million tonnes (Mt) of wheat in its current marketing year which started 1 April.

This would make it the fourth-largest wheat crop ever for India, and compares with 98.5Mt produced in 2017-18.

Despite sufficient domestic supplies, the report said India had imported 1.5Mt of wheat in 2018-19 to help fill its quality requirements.

The USDA report said India has most recently imported wheat from Australia, Russia and Ukraine, and that India’s purchasing of offshore wheat tapered off from December 2017, when the country’s wheat tariff hit 20pc.