THE LIKELIHOOD of India importing chickpeas for the rest of 2019 is limited as big carryover and new-crop stocks continue to quash demand from the world’s biggest pulse market. 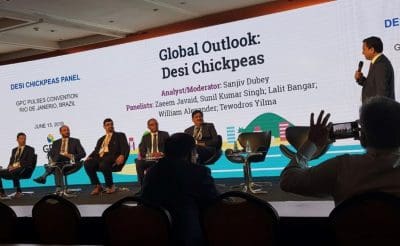 That was the message from of the National Cooperative Marketing Federation (NAFED) additional managing director Sunil Kumar Singh in his address on the desi chickpea market to the Global Pulse Confederation (GPC) Pulses19 conference held in Rio de Janeiro last week.

NAFED executes the Indian Government’s pulse policies, and is responsible for the buying pulses and oilseeds at minimum support prices, as well managing national buffer stocks of pulses.

The panel session was moderated by Sydney-based analyst and Pulse Australia and Graintrend director and GPC vice president Sanjiv Dubey, who said the market is that India’s tariffs are in place until March 2020.

“What Mr Singh told the forum was that NAFED has stocks of 1.3 million tonnes (Mt) of chickpeas on hand, and they have the mandate to buy chickpeas at a minimum support price, stock them and, if the price goes up, sell them into the market,” Mr Dubey said.

New-crop production from India’s March-April rabi (winter-crop) harvest has been estimated by NAFED at 10.09Mt, which alone would be more than enough to cover  India’s annual desi chickpea consumption of 9.6Mt.

“Some of the trade thinks that new-crop figure is on the high side, but even if you say it’s 9Mt, that is still more than enough to cover requirements when you add the 1.3Mt of stock.

“India can hold on to its stocks for another two or three years so, as of now, they are not buying.

“They think they’ve got enough, and they’re not going to open up their market in the foreseeable future.”

India is traditionally Australia’s biggest chickpea market, and its continuing absence of buying interest has seen exporters ship bulk and boxed chickpeas into alternative markets, with Bangladesh being the largest.

In his presentation, Mr Dubey said Bangladesh traditionally imported 120,000-150,000t of chickpeas, with Australia its major supplier, but this year it has imported closer to 200,000t.

Its demand has helped to stabilise Australian chickpea prices at historically strong levels of $650/t-$700/t on-farm in recent months.

Demand from Pakistan has also proved significant for Australian as well as Tanzanian and Russian exporters.

“While bigger than last year’s, Pakistan’s desi crop is lower than initially estimated, and they have contracted a further 400-500 containers, or approximately 12,000t, of Australian chickpeas for May-to-August 2019 shipment.”

However, new-crop trade in desi chickpeas in Australia is virtually non-existent outside Central Queensland and the Liverpool Plains due to production concerns held by farmers facing another critically dry growing season.

This has fuelled growers’ wishes to plant cereals, which provide better groundcover than chickpeas for their paddocks, and are also selling at very strong prices to reflect drought-driven domestic demand.

Mr Dubey said new-crop production earlier had potential to reach 600,000t, but hopes for such a large figure have faded due to dry conditions in much of New South Wales and Queensland, Australia’s major desi chickpea-growing states.

“There may be some patches in south-west Queensland which are okay, but southern Queensland is very dry, and a lot of NSW seems to be terrible now.

“We do still have some hope in the planting window, as the Liverpool Plains could plant up to the middle of July.”

The north-west plains of NSW, including the Moree and Narrabri districts and points west, can produce close to 1Mt of chickpeas in a bumper year.

For the third year running, these districts are massively short of soil moisture, and have planted very little chickpea area.

They are now likely to fallow any ground prepared for planting in the hope that they get sufficient rain to plant a sorghum crop over summer, or a timely winter crop in 2020.

Its growers planted on time and into adequate moisture, and will be supplying most of Australia’s exported chickpeas from October onward.

Ethiopia and Tanzania are both continuing to produce considerable export surpluses which totalled 48,967t and 15,850t respectively in 2018.