AUSTRALIA’S August canola exports hit their highest point since April, with 95,357 tonnes shipped, more than double the July total of 46,408t, according the latest export data from the Australian Bureau of Statistics (ABS). 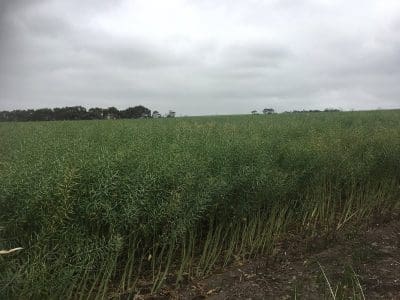 The Eyre Peninsula this year has some of Australia’s best canola crops like this one near Port Lincoln.

Looking to new-crop, Western Australia appears to be the only Australian state that will have a significant export surplus, as crops in New South Wales, Victoria and parts of South Australia are being cut for hay because of dismal yield prospects.

iGrain broker, Duncan Whittle, said crops in WA and on South Australia’s Eyre Peninsula were in the best shape of any Australian canola-growing regions.

“In other areas, there’s been a bucketload cut for hay, and growers are wondering why canola has lost so much of its premium over wheat,” Mr Whittle said.

“It’s normally double the price, but it’s much less than that this year because of what the drought has done to cereal values.”

Mr Whittle said the reason lay in global canola values being a function of the soy market, which was suffering from the effects of the US-China trade stoush.

This could price soybeans at levels low enough to be attractive to crushers on the east coast, particularly Cargill’s Newcastle plant, which would normally process canola.

“Bringing soybeans into Australia, even for crushing in coastal areas, brings with it some quarantine hurdles which come at a cost, but it could work.

“My read is it would make more sense for the plant in Newcastle, or even ones up-country, to bring canola in by boat from WA to eastern ports, as long as there aren’t concerns about weeds that NSW and Victoria don’t have coming with it.”

Mr Whittle said soybeans might be worth the trouble, as their meal had a protein content of more than 45 per cent, compared with canola at roughly 35pc.

Despite the season-driven demand from eastern Australia for SA and WA seed, both states are still expected to export significant quantities of new-crop canola.

The Australian Oilseeds Federation has cut its forecast for the national crop now being harvested to a nine-year low of 1.96 million tonnes.