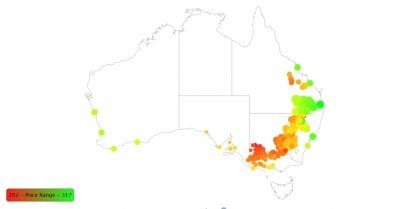 These regions are the beef cattle feedlot industry’s epicentre of grain use in Australia, and are also home to other intensive users of feed such as the poultry and pig industries.

Feedlot operators this morning told Grain Central they are presently road-hauling grain from the central west of NSW, around 800km south of the Darling Downs.  They said the drawing arc would continue to expand.  Tight harvests in November/December would likely continue to pressure supplies into the northern markets.

No shortage at a price

Feedlots are confident the balance sheet of wheat supply in eastern Australia has sufficient stock to meet the needs of feedgrains, human consumption milling and industrial demand, a view shared by analyst Lachstock Consulting.

“We have plenty of grain around to satisfy domestic demand,” Lachstock Consulting manager Lachlan Stevens said.

Figure 1 shows prices for Australian Premium White (APW) wheat this week from cheapest (red) to most expensive (green) in eastern Australian sites, and at port locations in South Australia and Western Australia, where feedgrain use is small.

In times of drought, grain typically flows by road into southern Queensland and northern NSW from storages in central and southern NSW, and from as far afield as the Mallee districts of Victoria and South Australia.

In periods of severe deficit, Queensland and NSW end users have been known to ship feedgrain from South Australia and Western Australia, but good to average southern crop conditions would be unlikely to see shipments happening in 2017.

Since July, APW wheat values in Brisbane have risen A$50/t at a time when world wheat futures prices have tumbled on news of record and near-record Black Sea-region wheat crops.

When dry conditions prevail in eastern Australia, where the nation’s domestic demand is centred, the spread widens between its wheat prices and those in export-reliant Western Australia.

This is shown in Figure 2, 2017-18 bid prices for APW1 wheat in a predominantly export zone such as Esperance WA, subtracted from Brisbane port price.

The uptrend reflects the influence of strong up-country domestic demand created by a troubled start for the mainly May/June plant winter crop.

With many northern NSW crops west of the Newell Highway looking at below-average yields at best, Mrs Reardon said northern buyers had no choice but to source feedgrain from the south.

“At the start of the year, people were talking about this huge surplus of grain we were going to have, and then the flood of grain that was expected to hit the market around the end of the financial year; that didn’t happen.

“We’ve had a record export pace which started with last year’s winter-crop harvest, and that seems to have cleaned things out up here.”

She said the premium being paid in eastern states reflected export parity plus freight.