DELAYED spring wheat plantings are forecast to cause northern hemisphere wheat production to fall in 2018-19, according to the International Grains Council’s April report issued overnight.

Russian wheat production is forecast to fall 12pc in 2018-19, with smaller declines likely for other significant exporters including the Ukraine and Kazakhstan, chart 1. US wheat production is also likely to be affected by cold conditions and snow affecting time of sowing. Harvest yield potential could be capped by the 2018 slow planting progress, shown in green at the bottom of the chart.

The IGC expects world stocks of grain to contract by 8pc at the end of the 2018/19 marketing year.

However, in world supply terms the slightly lower stock level would still represent a near-record quantity.

The stock reduction of almost 18pc among major exporters would cut export availability for trade to meet demand in world markets.

China’s take of Brazil soybean up, US down

IGC said that from the beginning of this marketing year, September 1, 2017, until the end of March 2018, US soybean export pace (chart 3 blue line) was lower than at any time since 2012/13.  The gap appeared to be filled by Brazil (yellow columns) as it had greater than normal export availability. IGC predicted a small increase in world barley consumption to 148Mt in 2018/19, though the end uses of barley would appear to be undergoing some change. While demand for barley for animal feed had experienced a period of strong growth in most years since 2014, world use of barley for industrial purposes such as malting for beer production and whisky-making appeared to be increasing marginally. IGC grains and oilseeds index (GOI), which is a consolidated index of prices for wheat, maize, barley, soybeans and rice, has registered an increase in values each month since January (chart 5, index base month January 2000 = 100). 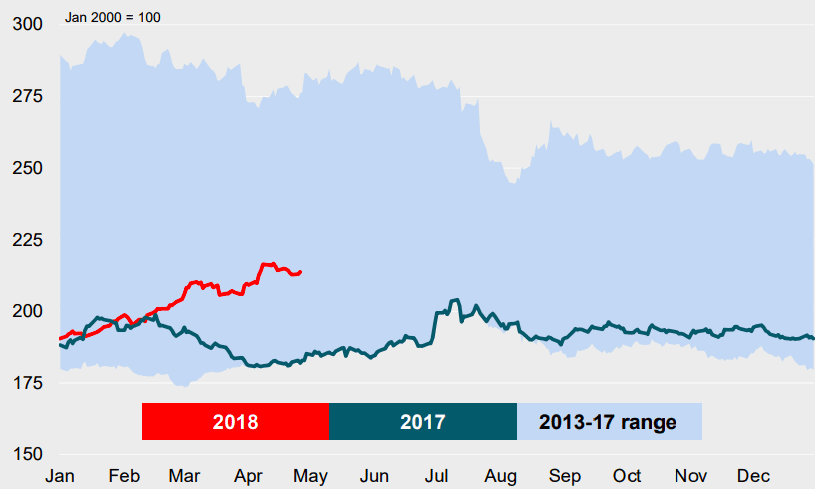