THE fall in prices for old-crop Australian lentils is showing signs of slowing as stocks from the record 2016 harvest run down, and some exports continue to steer clear of Canadian old-crop and its quality problems. 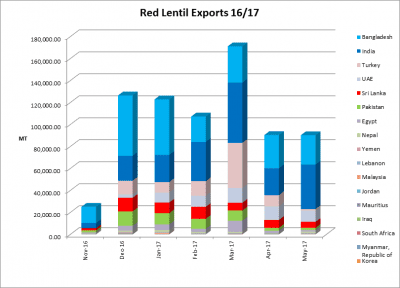 Australian Grain Export trader, Will Alexander, said Australian lentil prices have dropped by more than $400 per tonne across the whole season under supply-side pressure from a “huge supply” from Canada and Australia.

“Currently, old-crop prices would be around $550/t delivered and above, depending on variety and delivery,” Mr Alexander said.

“The only positive right now is that prices may not go any lower.”

Last year, Australia harvested its biggest ever red lentil crop, thanks to record yields of 3-4 tonnes per hectare over 250,000-300,000 hectares.

“In the year to date, we will have exported 800,000t and there are still some lentils left out there. This tells you how big our crop was and how big demand has been.”

Australia normally exports around 200,000-300,000t of lentils, with roughly two-thirds coming from South Australia, and the balance from Victoria.

Mr Alexander said last season’s red lentils from Canada were poor quality, and prompted a number of buyers to switch to sourcing lentils out of Australia.

“Turkey is one destination that usually buys mainly Canadian, but this year we have seen them import 100,000t from Australia, which is purely a reflection on quality and competitive pricing.”

“Overseas markets are full of lentils and demand is non-existent. Canada still has a large stock of old-season poor-quality lentils, so oversupply has led to a very quiet market.

New-crop Canadian lentils are due to hit the market in August/September, and the crop is likely to be 20pc smaller than the country’s 2016 crop.

“There will be plenty of lentils available again. Even though the weather has been dry and hot in Canada, and mixed in Australia, the prospects for lentil prices to rally in the coming weeks are limited.”

“There still seems to be a bit of old-crop about, more in South Australia than Victoria.”

“Unless something happens around the world to affect the crops that are in the ground, you would think the price will have to drop a bit further.”

This compared with offers in early June of $680-690/t DCT, and bids of $640-$650/t, when demand from destinations such as Bangladesh had dried up ahead of Ramadan, the Holy month.

Mr Nicholls said new-crop was offered at $680 for November-December delivery, but had failed to attract genuine bids as planting of the South Asia crop, and a focus shift to new-crop Canadian, took precedence.