AUSTRALIAN wheat production is set to be the lowest since 2007-08, largely due to drought conditions in the east, with increased domestic demand reducing export potential, but rising world prices more than offsetting the impact.

ABARES latest agricultural commodities report says a 7 per cent drop in the value of crop production to $29 billion was the main reason for a forecast fall of 3pc in the value of Australia’s overall farm production in 2018-19 to $58 billion. 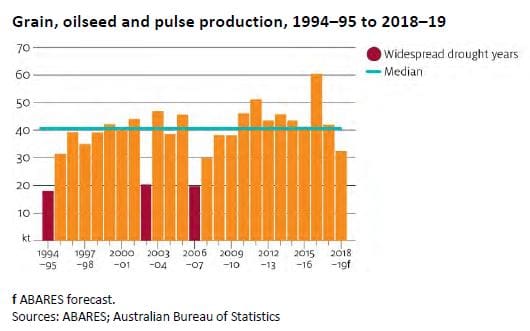 ABARES executive director Dr Steve Hatfield-Dodds said that while drought was affecting crop production in the east, increases in prices and strong production in Western Australia were providing a buffer to the national outlook.

“The annual value of crop production is forecast to decline by seven per cent to $29 billion in 2018–19, driven by a 23 per cent fall in winter crop production nationally, as a result of the drought in cropping regions in New South Wales, Queensland and Victoria,” he said.

“Forecasts for an above average winter crop harvest in Western Australia and higher prices for broadacre crops are keeping the value of production from falling further. A lower Australian dollar will also help.”

Lower production in China is likely to increase domestic demand for high-quality milling wheat imports. As a result of China’s 25pc tariff on United States wheat imports, the demand is likely to be met by Canada and Australia. ABARES says world coarse grain prices are forecast to rise in 2018–19 as a result of growing demand for feed and industrial use, particularly in China and the US, resulting in a significant reduction in world stocks.

Coarse grain production is forecast to grow slightly in 2018–19, largely because of a forecast increase in corn production. Larger corn crops in Argentina, Brazil, Ukraine and the US are forecast.

Hot and dry conditions have adversely affected barley production in Australia, the European Union and the Russian Federation. As a result, world closing stocks of barley are forecast to fall to their lowest level in 34 years. Reduced supplies of canola in Australia and the European Union are expected to result in increased world canola prices. World demand for canola is forecast to outpace supply, leading to reductions in stocks and upward pressure on prices.

Global imports of canola and rapeseed are expected to rise slightly in 2018–19, mainly in response to a shift in Chinese demand from US soybeans to canola from Australia and Canada. Chinese canola

import growth is being partially offset by declining demand in the European Union, where demand is being displaced by imports of relatively cheap US soybeans. Sugar prices are expected to fall to a 10-year low, driven by record world supplies.