THE rising cost of stock feed in Asia is raising the unlikely prospect of feedlots in Indonesia importing feedgrain from Australia – a scenario that once seemed inconceivable in a country where large volumes of cheap feed has always been a major advantage. 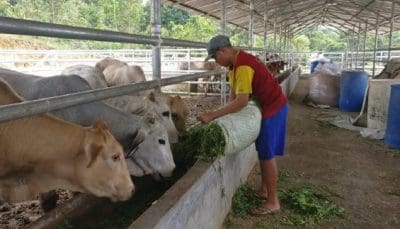 But the dynamics have changed in recent years as the price of feed ingredients has soared, driven up by factors including increased export demand for the same products, improved processing which has made many of those former ‘waste’ products viable for human consumption, and Indonesian Government policies designed to limit imports in order to promote self-sufficiency.

Local feed costs have increased to the point where some believe it would now be getting close to economically viable for Indonesian feedlots to import feed from Australia, such as barley or lupins or whole cotton seed meal, at certain times of the year.

Australian feed products are still at relatively high prices also, and the process would require Indonesian feedlots to look at changing their feed processing systems to enable them to roll or crack grain, which would add more costs to what has traditionally been an unprocessed mix-only ration. Container transport costs are also now reported to be three times more expensive than pre-COVID, which further complicates the supply equation.

However, with reworked rations the cost of importing Australian grain would be close to working, some sources have told Beef Central and Grain Central in recent weeks, and it is another option Indonesian lot feeders would welcome having access to.

On paper the opportunity to import Australian feed materials is enabled and encouraged through the IA-CEPA trade agreement that came into effect between the two countries in July 2020.

The agreement provided access into the Indonesian market for 500,000 tonnes of Australian feed grains at a 0 percent tariff, which increased to 551,250 tonnes on January 1, 2022.

However, while these arrangements have been in place for well over a year, no significant volumes of feed grain have been exported from Australia to Indonesia under IA-CEPA.

The agreement allows individual commercial entities in Indonesia to import feed grains such as barley and whole cotton seed,  but it is understood that Indonesian authorities are yet to include those items on the list of products that Indonesian companies can apply to import, which is effectively stalling the trade.

It is believed the issue is being discussed at relatively high-levels between representatives of both Governments and is likely to be on the agenda when Australia’s federal agriculture minister David Littleproud visits Indonesia in coming weeks.

At the same time industry funded work has been underway in recent years in different projects through AEGIC and the MLA/LiveCorp funded LEP to provide targeted support to Indonesian cattle, dairy and poultry feeding businesses about how Australian feed stuffs can be used to broaden their feed base.