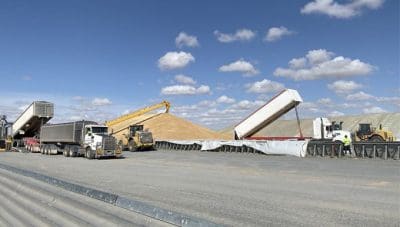 VITERRA’S South Australian operations wound up their biggest receival week of the harvest to date on Sunday, taking in 802,457 tonnes of grain to lift the total 2019/20 intake to 2.3 million tonnes (Mt).

Viterra operations manager Michael Hill said last Monday and Tuesday were the company’s two biggest days so far this harvest, with growers harvesting as much as possible ahead of Wednesday’s network-wide site closures due to forecast extreme heat and windy conditions.

“Safety is our highest priority, and after consulting with our strategic site committee chairs, their support was behind closing all sites on Wednesday due to the forecast conditions,” Mr Hill said.

“To minimise any impacts from the closures, we extended opening hours for Monday and Tuesday, some sites until midnight, and saw receivals exceed 170,000t both days.”

Receivals in the western and central regions both 1Mt last week, with central taking the most grain of the three regions last week and for the harvest to date.

“Our Port Giles site remained closed on Thursday due to fires in the area, and we continue to work closely with affected growers to understand any impact on remaining crops and provide delivery options if required.”

Viterra western-region operations manager Nick Pratt reported a busy week for grower deliveries, and the loading of the first vessel at Thevenard for this harvest period with grain from last season.

“The majority of grower receivals were in the south, with high receival days recorded at our Lock, Cummins, Port Lincoln and Tumby Bay sites,” Mr Pratt said.

Viterra eastern-region operations manager Jo Klitscher has reported harvest in the region is ramping up.

“We received twice as much grain last week as the one before, with most sites starting to extend hours to match the increase in harvesting,” Jo says.

“After our Frances site welcomed its first delivery on Friday, all sites are now receiving grain.”