Santa overwhelmed with orders for rain

THE SOUTHERN hemisphere’s second-biggest wheat producer is Argentina. Heavy rain across a large portion of the country’s northern wheat-production region in the past week brought harvest to a halt and started to raise quality concerns for the area yet to be reaped. The forecast for more rain over the next week has added to the market’s anxiety. 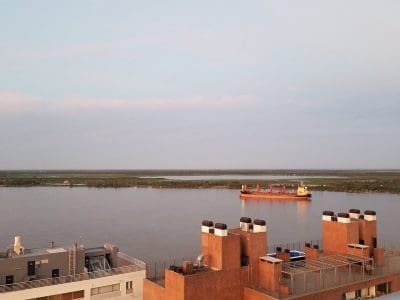 The extreme weather comes on the back of frosts in the later-maturing central and southern wheat-growing regions which will also have quality and quantity ramifications as the harvest moves south. The province of Buenos Aires was the hardest hit by the latest frost, which arrived right in the middle of the critical flowering period.

Further west, hail storms hit the wheat crops in the southern Cordoba and the northern La Pampa as the crop was moving to the end of its grain-fill stage. Again, this is expected to manifest itself in lower yields and poorer quality in affected areas.

As a result, the Rosario Grain Exchange has reduced its wheat production estimate to 18.7 million tonnes (Mt),  a 3.6-per-cent reduction from its early November estimate of 19.4Mt. The exchange reported the pace of the wheat harvest was slower than normal at around 52pc complete, compared with 58pc at the same time last year.

According to the Buenos Aires Grain Exchange, the average wheat yield is running at 2.71t per hectare, and there was just over 9.5Mt in the bin as of 13 December. Even though recent weather events have decreased final production expectations, Argentina is still expected to produce around 7pc more wheat than last season.

As with the Australian harvest, Argentina’s usually brings a fall in prices as supply increases sharply. However, the market has moved in the opposite direction on the back of lower production and strong export demand, primarily at the expense of Australia. Values for 12pc protein wheat have reportedly risen around 5pc in the past week, trading on Thursday at US$223/t free on board (fob) for  up-river January loading. That market was subsequently offered at $228/t fob.

Up-river refers to the Paraná River ports west (or up the river) of Buenos Aires.  At 4,880 kilometres, the Paraná River is the second-longest river in South America, and runs through Brazil, Paraguay, and Argentina. It is an extremely important trade pathway for Argentina and the landlocked country of Paraguay. The volume of water that flows into the Atlantic Ocean via the Río de la Plata roughly equals that of the Mississippi River.

In the meantime, the Egyptian Government’s grain-buying arm,  GASC, unexpectedly dropped into the market last week and picked up another 180,000t of wheat in three cargoes for early February 2019 shipment. Russia sold two cargoes, and Romania the other, but the big surprise was the price which was around $6 higher than its purchases only one week earlier.

The higher price paid by GASC this week appears to be a reflection of declining Russian supply and less aggressive offers, as local farmers are reportedly holding on to their remaining stocks in the expectation of better prices. Russian 12.5pc protein wheat reportedly closed the week, offered at around $237/t fob for Panamax-capable ports.

The talk of Russian export restrictions has reared its ugly head again this week. It seems that every time its government arranges to meet exporters (another meeting is scheduled for 21 December) the rumour mill goes into overdrive. Maybe the threat of restrictions, solid domestic demand, and increased grower resolve will be enough to do the job without government intervention. Only time will tell!

The United States Department of Agriculture (USDA) still has Russia in for 36.5Mt of wheat exports, but it is the only organisation that believes it. Current export pace supports that number, but lower production (70Mt compared with 85Mt last year) and increasing internal prices going into the Russian winter certainly suggest that volume is not possible.

Talk in Australian markets over the past week was dominated by the forecast of widespread rainfall throughout the summer-cropping regions of northern New South Wales and Queensland. The rain arrived on time and some localised recordings, particularly on the inner Darling Downs, were better than expected. Nonetheless, in general, the falls to date have disappointed when compared with the lofty forecasts. I guess that has been a consistent theme throughout 2018.

Sorghum values moved lower across the week on the back of the optimistic weather forecasts, with bids dropping below AU$350/t delivered Downs, before rising slightly to close the week. However, wheat values have remained firm, and with sorghum quoted at a discount of at least $80, sellers were simply not engaging with the market. With Western Australian wheat, eastern Australia’s major stockfeed alternative, reportedly finding robust export demand, who could blame them?

The huge spread between sorghum and wheat values delivered into the key Darling Downs and Brisbane consumption markets appears to reflect a new-crop sorghum-production number of well over 2Mt. Based on reported seed sales, that is probably conservative. Based on reality, there is one key requirement before this becomes conceivable: More rain!

Precipitation over the past four days has been fantastic and welcomed, but more widespread falls are required.

This article was written by Peter McMeekin, who consults to Grain Brokers Australia