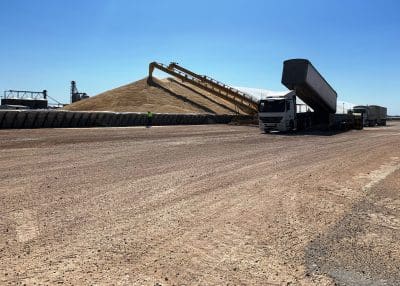 SOUTH Australia’s major bulk-handler Viterra has received 586,000 tonnes of grain in the week to Tuesday to lift its total receivals for the current harvest to 2.9 million tonnes (Mt).

Cooler weather and light showers late impacted growers’ ability to harvest, and most grain received was wheat now that the barley and canola harvests have finished in some areas.

Viterra reports all 65 of its sites, including two in Victoria, are open for the 2019/20 harvest, and have received grain.

Viterra Western region operations manager Nick Pratt said sites in the mid and lower Eyre Peninsula have recorded some large receival days in the past week.

“Our Cummins, Port Lincoln and Tumby Bay sites were the region’s busiest, and we had large tonnes delivered early in the week until Friday, when the weather brought the entire region to a halt,” Mr Pratt said.

“Our Roseworthy site had its biggest day so far this harvest on Thursday and extended its opening hours until midnight,” Viterra Central region operations manager Jack Tansley said.

“Our Saddleworth and Eudunda sites also recorded an increase in tonnes received compared to the previous week.

“We loaded domestic trains at Gladstone and Bowmans as our strong rail schedule continues.”

Viterra Eastern region operations manager Jo Klitscher said the region had its busiest week so far this harvest, with barley still the main grain coming into the system, but delivery of other commodities has started.

“Despite the cooler weather on the weekend slowing down receivals, we remained open and will continue to ensure growers have delivery options with us.”