UKRAINE grain prices are under pressure from reduced domestic demand and a dwindled export program, both as symptoms of Russia’s military actions within Ukraine which started on February 24.

“The global move is up, the domestic move is down.”

He said from February 24 to March 9, Ukraine’s grain trade stopped, but as of late March, domestic trade has picked up, albeit to minimal levels.

“Trade is mostly in small batches from several hundred to several thousand tonnes of grain.

“Now it is an interesting trend.

“Now mid-size and even small exporters are most dynamic in the market.”

Mr Feofilov said these smaller operators were better placed to move grain by rail and road than larger ones.

“Medium-sized and small ones are now the most promising partners, while the biggest companies are hurt by the stop in Black Sea activity.”

“Under these conditions, we recommend you buy very cheap Ukrainian wheat, and buy it now, but only in Ukrainian territory.”

“According to the latest news, the export licences have again started to be issued, and this is rather inspiring information for exporters. “

Mr Feofilov said the direction of Ukraine’s new-crop cereal markets depended on whether or not exports out of Black Sea ports could be resumed.

“There is sufficient storage capacity in Ukraine, but if grain export is blocked until July, with arrival of new-crop wheat and barley, this may generate problems with storage as ending stocks…are projected to be very high.”

“Ukraine is really now the focus of the global grain market.” 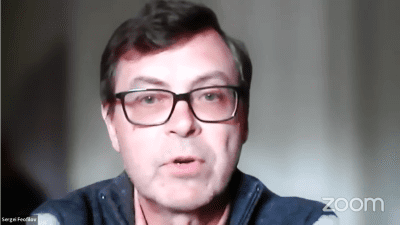 Mr Feofilov said estimates were “critically controversial” for 2021-22 and 2022-23, and that Black Sea and Ukrainian markets needed to be monitored closely because of their decoupling from global trends.

“The situation changes so quickly.”

He said Ukraine’s March grain-export figures were a case in point.

“I suppose the majority of these exports went through customs…but did not cross physically the borders and currently I suppose a major part of these export volumes are either on the vessels blockaded at Black Sea ports, or they are stored in customs warehouses, or at inland elevators.”

All have vessels that arrived prior to February 24 still on the berth.

“Ukraine traditionally exported 95-96 per cent of grain by vessels but currently, exporters have to develop alternative routes.”

Mr Feofilov said Ukraine’s only two functioning ports, Izmail and Reni, are both located on the Danube River, and their capacity is “very small” compared with Odessa.

“The main trend now is the sharp increase in rail shipments.”

He said around 70pc of Ukraine’s grain was being exported by rail, with the balance going out of the Danube ports.

“Physically it is possible to export 30,000t of grain and oilseeds per day.”

This compares with around 165,000t/day when Black Sea ports are operational.

Other ports being looked at for their potential to export bulk Ukrainian grain include Gdansk in Poland, and Constanta in Romania.

“Another option is export by railway containers.”

“It is important to explore any possibility to increase export.”

“We expect that by early May, the logistics situation may improve.”

When asked if pathways for Ukrainian grain out of Turkish ports were being considered in order to supply Middle East and Asian markets, Mr Feofilov said transit over Ukraine’s western border was the focus.

“I suppose these possibilities are not yet under consideration.

“I do not think it is highly likely, but who knows in this term of high uncertainty.”

Mr Feofilov said the conflict has corralled a significant portion of Ukraine’s wheat, corn and sunflower seed export surpluses, but not barley.

“Before late February, all barley was exported.”

“Barley currently is rather attractive for Ukraine as barley is one of the cheapest cereals in production.”

“Barley planting rates are even higher compared to last year.

“I think that barley production might be not so negatively affected as other cereals.”

Ukraine harvested a record wheat crop last year of 32Mt, and up to 19Mt had been exported as of February 24.

“More than 4.6Mt was left on Ukrainian territory, and this quantity might be exported.”

Corn, which is harvested later than cereals, has been hit hardest by the halt in Black Sea shipping, with just over half of expected exports shipped prior to the war.

“This year, because of the export restrictions, domestic demand and sales…decreased considerably.

He said the Ukrainian Government was providing large-scale finance at zero rate to help fund the spring plant.

“According to the Ukrainian Ministry of Agriculture, seed supply is sufficient but fuel and fertiliser is lower.

“The fuel deficit is the most critical factor for the current spring-planting campaign.

He said spring planting will continue, even with limited inputs, and he was working on three scenarios for Ukraine’s 2022 winter and spring crops: pessimistic, average, and optimistic.

“My fear is the average scenario is most likely.”

He said growers were continuing to fertilise their winter crops including wheat ahead of the four-week main planting window for summer crops which is now opening.

“Ukrainian farmers dream about peace on their land.”

After that, he said they are worrying about money, fuel and exports to allow sowing to go on. 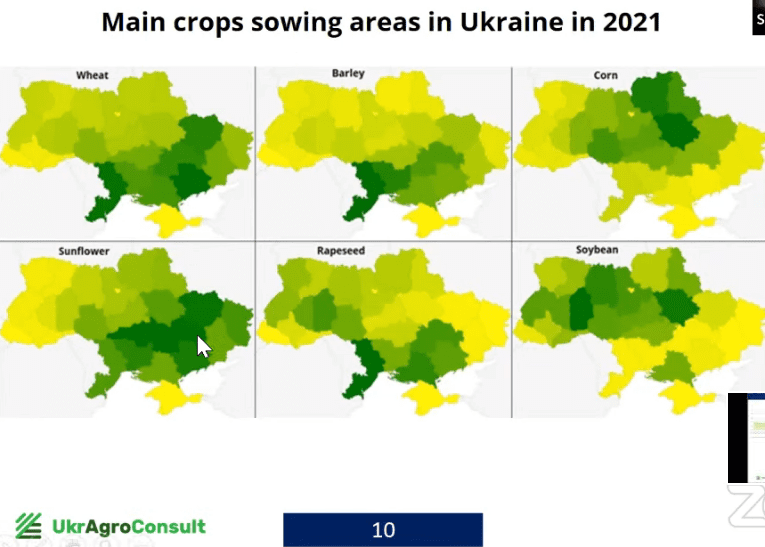 He estimates Ukraine’s planting of corn and sunseed will be 3.5Mha lower than last year’s area due to ongoing military action, and that Ukraine’s regions with high military risks were the country’s key producers of grain and oilseeds.

“Yesterday I had talks with the chairman of a farmer association in one of the central regions of Ukraine, and I was told that in fact (plantings) will be as usual.”

Mr Feofilov said corn was capital intensive and farmers were keen to save money in coming months to repair equipment damaged during the military action, so might plant crops which are cheaper to grow.

“Corn harvest is under the biggest uncertainty compared to other grains, firstly due to military actions.”

UkrAgroConsult forecasts Ukraine will produce 19-20Mt of corn over its coming summer, well below estimates from some others which are putting the crop at 23-25Mt.

Mr Feofilov said Ukraine farmers might receive lower prices for their corn relative to other grains, and this reduced revenue might influence their decision and prompt a switch to cereals.

He said sunflower plantings looks low compared with area planted over the past 10 years.

“By late February, only 10Mt was crushed.

Mr Feofilov said the vast majority of Ukraine crushers stopped processing because of the military risks.

“This situation will pressure…Ukrainian farmers and their decisions.

“Our forecast is that sunflower area could decrease considerably, really considerably, and also yields will be low because of deficit of some inputs.

“Due to high ending stocks, total supply of sunflower for new season which starts in September will be at an average level of previous years of 15-16Mt.”

“The first is sufficient input supply, and then, as usual, weather.

“Though winter in general was quite friendly for winter crops, a precipitation deficit is seen in eastern and central parts of Ukraine.”

He said rainfall in Ukraine’s west was 50-70pc of the multi-year average.