WA harvest nears half way with 5Mt in the bin

BULK handler CBH Group has received more than 5 million tonnes (Mt) of grain, or 41 per cent of the expected total, as of 24 November in the harvest currently under way in Western Australia. 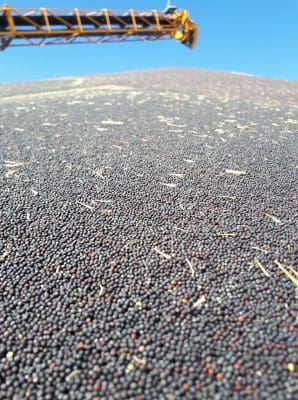 WA’s canola harvest is winding down in some areas: Image: Spike Jones, Merredin

In its weekly harvest report, CBH said harvest in the east and north of its Geraldton zone would start to wind up in the next week or two, and that Esperance was about halfway through its harvest.

In the Kwinana zone, harvest is forecast to be about 37pc complete, and Albany 28pc.

CBH general manager operations, David Capper, said unfavourable harvest weather was forecast for this week, and CBH was gearing up for longer shifts when needed to suit deliveries.

CBH reports weather in the week to Friday improved across most parts of the state, which allowed growers to get back into harvesting after a period of wet and stormy conditions.

“The weather has been a big factor in this year’s harvest and we’re hoping the periodic rain and storm conditions are coming to an end,” Mr Capper said.

Improved weather over the past week has seen deliveries increase, with barley and canola still dominating receivals.

Grain quality has continued to be good, with canola averaging 47pc oil, and the percentage of barley being delivered as malting rather than feed increasing.

“Only a small volume of wheat has been received to date, and spread evenly across all segregations so it’s too early at this stage to determine quality,” Albany zone manager, Greg Thornton, said.

“As shipping for the harvest period is low and yields in many areas are slightly above expectations, we will start to move some grain from site to site next week to consolidate segregations and create additional space at sites as growers start to transition from coarse grains to wheat.”

Thunderstorms which generated more than 40 millimetres of rain in places on 17-18 November again slowed harvest in the zone.

The rain was followed by cool, damp weather which has stopped most growers from harvesting for close to a week.

“There were some isolated reports of hail, although we don’t expect it to have a big impact on the tonnages we expect to receive,” Esperance zone manager, Mick Daw, said.

“Most growers have now finished their canola and barley and are starting to harvest their wheat, and yields being achieved across the zone have been exceptional,” Mr Daw said.

Most of the zone’s forecast canola deliveries have now been received, and lupins made up a large proportion of the week’s receivals as growers now move on to their wheat harvest.

“In the next five to seven days, we will start to close some receival points off as the tonnage starts to fall, and growers start to wind up harvest,” Geraldton zone manager, Duncan Gray, said.

Canola and barley receivals were starting to slow down in the north and east of the zone, with wheat dominating receivals; in southern areas, canola and barley has remained the focus for now.

“All sites in the zone are now open and we will be working longer hours and double shifts at the main sites to suit deliveries.”