DELIVERIES to Western Australian bulk-handler CBH Group slowed over all four zones in the week to Friday, with 1.4 million tonnes (Mt) of grain received at its sites to lift total intake for the current harvest to 8.6Mt. 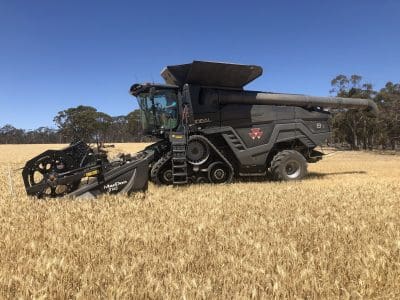 “The majority of growers in these areas will be finished within a week, if they aren’t (finished) already,” Mr Macnamara said.

“Deliveries might continue up until Christmas, but these will be few, and likely to be straight to port, so we will close up most sites in these zones within the next week.

“With the shipping stem fully booked for the first few months of the New Year, we will start to turn our focus to moving tonnes to port so we can meet those shipping requirements.”

Weather for harvesting was favourable last week, and similar conditions forecast for this and next week will see harvest in the Geraldton zone finish before Christmas.

Some sites in the zone closed last week, and only the larger sites are scheduled to remain open in the lead-up to Christmas to receive around the last 100,000t or so this harvest.

Quality of recent receivals has declined slightly from earlier deliveries, but overall quality has been better than expected.

Last week’s favourable harvest weather is expected to continue to allow the zone to come close to finishing harvest by Friday.

Three more sites closed for the season last week, and more are expected to close this week.

As deliveries wind down, wheat is making up 95 per cent of deliveries.

CBH Group continues to manage variable grain quality in the Kwinana North zone, and has opened a seconds stack in Merredin to cater for wheat with very high screenings.

Some smaller sites have closed for the season, with more to follow this week as more growers finish harvesting.

With 488,000t delivered in the week to Friday amid favourable harvesting weather, Albany received the most grain of any zone.

Some sites in the western part of the zone including Cranbrook experienced peak deliveries last week, while the eastern parts of the zone are winding down.

CBH Group is looking to close some sites in the north-eastern part of the zone this week now that growers are finishing their harvest.

Canola deliveries have all but stopped, and while some substantial late barley deliveries came in last week, wheat is making up most of the tonnes.

Yields and quality have improved as harvest pace picked up in the Albany zone’s western areas.

Rain early last week slowed harvest and deliveries across the Esperance zone, but a return to clear conditions by Wednesday saw receivals, mostly to port, pick up.

Sites around the zone are starting to close as most growers have finished or are very close to finishing their harvest.

CBH Group’s Esperance Terminal will remain open in the lead up to Christmas to collect any late deliveries.

Early last week, reasonable volumes of wheat were sold by growers as APW1 rallied to $348 per tonne free in store (FIS) Kwinana before prices fell late in the week after the trade covered a number of early shipping positions.

This includes an estimate for WA 6Mt, which some are saying is optimistic.

The international market is still showing interest for lower grades, but these are now very limited with the majority of the crop being higher protein.

The malting barley market continued to firm over last week, with Spartacus prices rising to $310/t FIS Kwinana as the industry looks to cover international and domestic demand.

A rise of $15/t has been seen for feed barley, now trading at more than $290/t FIS Kwinana, a price high enough to attract some grower selling.

Feed barley looks competitive against wheat in feed rations which is enticing end-user demand, and is likely to place a floor in feed values.

ABARES has cut its estimate for the Australian canola crop to 2Mt, which will result in limited exports to Europe and China this season.

Oat prices over last week got as high as $385-$390/t FIS Kwinana, but this has not been high enough to attract volume selling from growers.