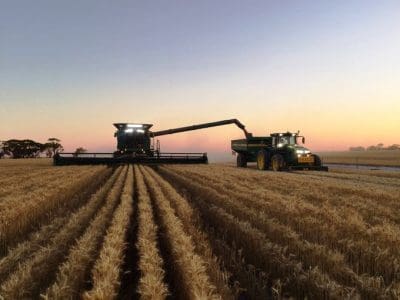 Harvest winds up on a farm at Bolgart, WA. Photo: Trevor Syme

WESTERN Australia’s harvest is all but finished, with deliveries into the CBH Group bulk-handling system at 9.5 million tonnes as of yesterday, when the co-operative released its final report for the 2019/20 harvest.

Some areas of the Albany and Kwinana South zones are still seeing big tonnages coming in, but the majority of sites across the network are now closed or closing for the season.

Geraldton, Esperance and Kwinana North zones have effectively finished harvest, with some key sites open to collect the remaining deliveries which are expected to trickle in over the next fortnight.

In the Geraldton zone, only three sites remain open.

In the Kwinana North zone, most sites are now closed, or close to it, for the seaon, which has been generally below average of the zone, with quality varying depending on the district.

Most smaller sites in the Kwinana South zone have now closed or are closing this week.

Dry weather in the lead-up to Christmas will see most growers able to finish harvest before the New Year in the Albany zone, where deliveries slowed at the end of last week due to harvest bans followed by rain in some districts.

Harvest in eastern parts of the Albany zone has all but finished, and sites will start closing this week.

Some big tonnages are still being delivered in the western part of the Albany zone, which has had a mixed season.

Growers in Albany’s eastern districts have generally had a below-average year, while growers in its western reaches recorded improved quality and yields.

In the Esperance zone, most country sites have now closed, with remaining tonnes being delivered direct to the Esperance Terminal.

Harvesting conditions have remained excellent, and allowed growers to get through their programs with minimal interruptions.