He said border closures and reductions in overseas workers severely cut the amount of reliable casual workers which would fill the harvest roles.

“One of our biggest challenges at the moment is labour,” Mr Hughes said.

“This would never be a problem before COVID.

“Personally, I am not sure where all the people have disappeared to, but it has been a real challenge the last two years just getting people over the borders.

“There was hundreds of thousands of backpackers that normally come through and do some of that work and they just weren’t about.

“We have grey nomads that come down from Queensland and across from Western Australia and other places and they couldn’t move around.”

“When you look at the most recent harvest, we had significant work; we had 2000 harvest casuals normally we have about 1500,” Mr Macnamara said.

“We put a lot of advertising out for it last year and we did see a really good uptake from the younger generations.”

He said attracting employees from younger generations has been key to meet the workforce quota.

Mr Macnamara said CBH is looking into new strategies to appeal to this group, as the company competes with the booming WA resource industry to fill positions.

“The other piece is appealing to the younger generations around sustainability. 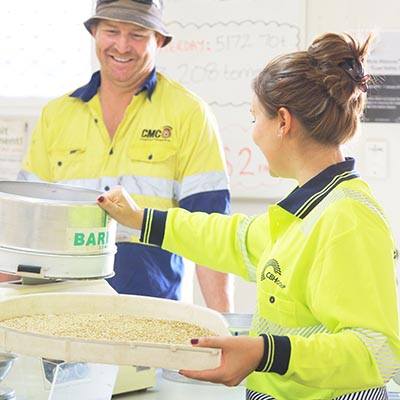 “Certainly, we are in that process where we are finding that younger people are willing to work in our sector because they see it is a sustainable industry compared to some of the alternatives.”

He said transport sector workers is one key employment overlap between CBH and the mining industry.

“One of the labour issues we are having is around transport in Western Australia, so train drivers and truck drivers.

“We have seen the resources sector really looking to pay high numbers to attract people across and that has certainly impacted us.”

Mr Hughes said he believed ongoing problems of funding to agriculture education and the reduction in rural populations were playing a part before the pandemic.

“It is interesting that the school base for the ag industry as a whole, I think, is severely lacking.

“We have seen over the last 20 years a lot of the ag colleges shut down around the country.

“You don’t have the flood of skills coming from those ag colleges to be able to work in the industries.

“As an industry as a whole, we have got to sell the ag industry and what we do as an attractive proposition for people coming through schools…but the training and the courses have got to be there as well.”

Mr Hughes said he also believes the loss of farming families has contributed to the declining ag workforce.

He said there are 60-70 per cent fewer farms compared to 30 years ago.

“What we used to find previously was that on a lot of farms, the daughter or the son would get the farm and the rest of the children would go off and either work in the ag industry or somewhere else.

“But only having a third of the farms that we had previously and the contraction of country towns, the labour is just not out there.

“It is building to a crisis level in all industries, not just the grains industry, but in the meat industry, wool, fruit and vegetables.

“We have got to be able to work with government to try and fix it because it’s in real trouble.

“The overseas backpackers and short-term visas and everything else will fix part of the problem.

“Our industry is growing, of course, in Australia and with the targets that everyone has set.

“The labour market can’t meet it where it is now, and it is going to be significantly behind in the next five, ten or 15 years.”

Mr Macnamara said he has also seen demographic changes in WA which have pushed more people out of regional areas.

“We are seeing a significant reduction in the number of people who are residing further away from the coast, so that is making it more difficult for us to employ people in regional areas.”

He said the regional and rural areas need more funding overall, from infrastructure to basic services to ensure more people don’t more to the cities.

Both men were behind the recently announced Federal Government Jobs and Skills Summit, which will be held at Parliament House in September.

The themes and outcomes of the Summit will inform the Employment White Paper, which will help to shape the future of Australia’s labour market.

“I was pleased to hear that the Prime Minister is actually having a skills and jobs summit at the end of the year,” Mr Hughes said.

“I welcome that, and I really think rural and ag skills need to be on the summit.”