CHALLENGING seasonal conditions and poor crop performance have led to a flattening of agribusiness conditions in the fourth quarter (Q4) of 2019, despite resilience in the lamb and mutton sector, according to NAB’s quarterly Agribusiness Survey.

NAB Agribusiness economist, Phin Ziebell, said seasonal conditions were a key driver of the results and accounted for large differences in confidence on a state-by-state basis.

“Victoria was the only state to record positive confidence levels, at +21, and this is directly attributable to improved seasonal conditions there,” Mr Ziebell said.

“The failure of winter crops in New South Wales and Queensland, combined with the costs of feeding livestock, led to low confidence levels there and a soft finish to Western Australia’s winter crop saw it go from an outperformer to having the second weakest confidence levels overall in Q4.” 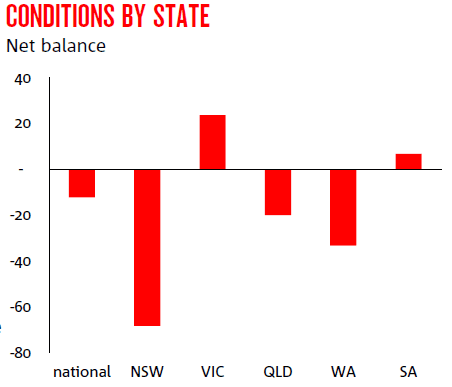 For the first time, the survey also asked bankers about the relationship between drought and a customers’ finances and wellbeing.

“When asked about the impact of drought on their customers’ finances and wellbeing, where zero is not at all and 10 is very severely, the average national scores were 7 and 7.1 respectively,” Mr Findlay said.

“This data reinforces not only the link between financial and personal wellbeing, but also the importance of close relationships between our agribusiness bankers and their customers, as they work through these tough times together.”

By industry, conditions in the lamb and mutton sector were again the strongest (+30), followed by aquaculture (+8), mixed cropping and livestock (+7).

“Q4 saw wool drop into negative territory (-2) which reflects the decline in wool prices from very high levels earlier this year, tough seasonal conditions in New South Wales and the impact of trade tensions between the United States and China.

“Those factors aside, wool is still a much more positive price story than it was a couple of years ago.

“The softest performing sector was cotton (-17) with very limited water availability a key driver there.”

Similarly, bankers were confident about agricultural land prices, with 65 per cent expecting them to rise in the next year.