TWO EXECUTIVES from global risk-management advisor and broker, Willis Towers Watson (WTW), are in Queensland and New South Wales this month to advance the case for multi-peril crop insurance (MPCI) as a cost-effective measure for governments to support in the face of drought. 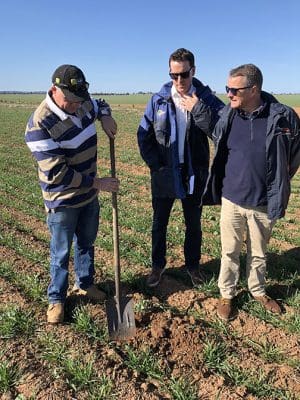 London-based Julian Roberts, and from Toronto, Scott Jellous, both said MPCI would enable Australia’s cropping sector to spread its production risk through the global insurance industry.

Mr Roberts said resistance to MPCI uptake in Australia was based on perceptions that premiums were prohibitively expensive.

However, he felt farmers in the grip of drought, and the governments subsidising them, might be prepared to revisit the cost-benefit value of a premium which would cover the cost of planting next year’s crop.

“The Queensland Farmers’ Federation (QFF) and the NSW Farmers’ Association seem very committed to supporting this, because it can provide their members with valuable support.

“Farmers’ federations have such a strong voice here (in Australia), and I’d like to think the Federal and state governments would pay attention to them.”

“A drought event like this sharpens everyone’s focus enormously.”

All of NSW is now drought declared and many growers in the northern half of the state have planted little or none of their intended winter-crop area. Crops which have established in most areas have limited yield potential.

Mr Roberts said the push for support in paying MPCI premiums needed to come from the farm lobby as a counter to the reluctance of growers to take out unsubsidised insurance policies.

“The culture in the take-up isn’t there.”

He said global crop insurance premiums created a pool of around US$35 billion.

“It’s a significant premium pool by any standards.

“We seldom see agricultural insurance programs adopted spontaneously; it’s generally on the back of some form of government subsidy.

“That comes from how well governments want to handle national disasters, and it’s well understood that dollars are better spent ex ante rather than ex post.”

“There’s a sound and robust logic as to why governments should do that, rather than leaping around in the face of an emergency.

Canada, the US, Europe, China and India are among the world’s major agricultural producers which have  government subsidies available or mandatory which cover roughly 35-65 per cent of the cost of MPCI premiums.

“There are robust federal crop insurance schemes in Canada and the US, and their objective is to be proactive when circumstances like drought are encountered,” Mr Jellous said.

Government subsidies on MPCI premiums offer what Mr Jellous said was “a compelling incentive” for farmers to insure themselves, and for governments to do the same for agriculture as a mainstay of the economy.

“That program from the Canadian Government goes back to the 1950s, and the provinces have evolved their products to suit the way farming has changed and get a geographical spread of risk.”

He said seasonal variability in Australia made policies tailored to each farm, rather than a district average, had become highly effective risk management tools in recent years.

“By structuring coverage that adapts to an individual farmer’s needs throughout the cropping season, growers and reinsurers remain goal congruent.”

Mr Roberts said the Argentinian Government was keen to help its farming sector, but was strapped for cash and could offer no subsidies to its farmers, although Argentinian producers did have “named peril” premiums available.

“We’re in active discussions with Argentina as a G20 nation operating in a climate similar to Australia, where no multi-peril crop insurance is in place.

“They have nothing as generic as what’s used in most other farming countries.”

Through WTW’s Brisbane office, Mr Roberts has already been working with agricultural insurance clients, and has been involved in discussions with the Queensland Government, the QFF, and University of Southern Queensland climatologist, Professor Roger Stone.

“We’re talking about how weather can influence premiums, and about the efficacy and cost benefits of products available.”

Griffith-based Andrew Trotter has been with Mr Roberts and Mr Jellous on their rural NSW visit, and is the principal of Latevo, which has links to WTW.

Latevo is one of a handful of companies in Australia offering MPCI premiums, which in 2018 cost roughly A$17-$30 per hectare.

“This product in various iterations has been around for several years now, and there is a growing base which is buying the product because it gives them the confidence to farm the right way,” Mr Jellous said.

“It offloads some risk to reinsurers, and this upfront strategy allows governments which are subsiding premiums to do the same by spreading their risk to counterparties around the world.

“However, it’s a long road for producers if they are the ones that have to champion it up to governments.”

Mr Roberts said growers could be encouraged to take up policies other than through direct subsidisation of their premiums.

“Providing a tax break on the cost of the premium could provide a hidden discount to the farmers which the government could facilitate.

“Government could also help support other systems, such as the Bureau of Meteorology’s collection of on-farm data, which would give us more accurate information about climate.”

“Australian weather is unpredictable, variable and volatile, but it’s measurable, and the data is what the insurance sector thrives on.”

The cost-benefit analysis of multi-peril agricultural insurance in the face of Australian drought has not been gauged, but Mr Roberts said some indication came from African Risk Capacity.

The agency involves the 55 countries of the African Union, and aims to improve their capacities to better plan, prepare and respond to extreme weather events and natural disasters.