INGHAM’S Group Limited has recorded a net profit after tax of $26.2 million in the half-year to 28 December, down 69 per cent on the corresponding first-half 2019 result. 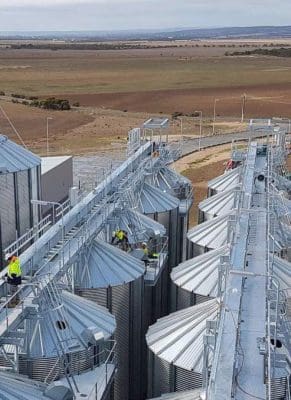 Ingham’s is a major user of wheat at its feedmills located across Australia. Photo: Ingham’s

The company is Australia and New Zealand’s largest integrated poultry producer, and produced 216,000 tonnes of poultry in 1H20, up 4.1pc on the corresponding 1H19 output.

Australian operations were affected by the company’s restructure of its further-processing (FP) network, while in New Zealand, a turnaround was seen following the earlier market impact from Infectious Bursal Disease Virus.

“The results are in line with our expectation as the business entered the half with the significant volume, cost, mix and margin headwinds from the FP restructuring,” Inghams Group Limited managing director Jim Leighton said.

“Pleasingly, operating momentum improved through the half and those issues are now behind us.”

Statutory earnings before interest, taxation, depreciation and amortisation (EBITDA) for 1H20 came in at $205.3 million, up 35.1pc on the 1H19 result.

Ingham’s is a major user of Australian wheat at its mills located in every state in Australia.

It said feed prices remained close to historic highs, and the overall result has been that Ingham’s feed prices have remained high.

“We remain conservative in our procurement strategy and the outlook for calendar year 2021 crop will not develop for some months,” the company said.

In its outlook, Ingham’s said feed costs were likely to remain elevated, and further collaboration with customers to mitigate cost would continue.

Ingham’s is in the midst of a five-year strategic growth plan, which it said was on track, with poultry holding its place as the most competitively protein based on price and reliability of supply.

The company said capacity growth initiatives in Victoria and Western Australia were on track, with the Somerville project south of Melbourne delivered on time and on budget, and the nearby Pakenham Hatchery under construction.

In Western Australia, the Osborne Park project in Perth is on track for delivery in the current reporting period, and work on the WA hatchery is ongoing.