The Mingenew farmer will be the Western Region Panel Chair from September 1 this year, taking up the position that has been occupied by Dunn Rock grower Peter Roberts since 2011.

GRDC Board chair John Woods today congratulated Mr Lee on his appointment and paid tribute to Mr Roberts who is stepping down from panel duties after 10 years of diligent service.

“Darrin has been a member of the Western Region Panel since 2014 and during that time has clearly demonstrated he has the attributes and leadership qualities needed for the role of Panel Chair,” Mr Woods said.

“He is passionate about driving increased profitability for our grain growers, he engages well with growers, advisers, researchers and other grains industry personnel, and his keen personal interest and involvement in agricultural technology and food production will no doubt add to the wealth of experience and expertise he brings to the role.”

He has a background in banking and finance, and is a past member of the CBH Group Growers Advisory Council and a previous Board member of Mingenew Irwin Group.

While announcing Mr Lee’s appointment for an initial two-year term, Mr Woods commended Mr Roberts on his outstanding contribution to the Western Panel, the GRDC and the broader grains industry.

“Over many years, Peter has been incredibly influential in ensuring the issues most affecting grower profitability in the Western Region are recognised and addressed through impactful investments in research, development and extension,” Mr Woods said.

“Peter has led the Western Panel with distinction, and recent advances in grains production in WA can in many instances be attributed to his commitment to the industry and his untiring efforts to serve growers’ interests.”

A grain grower from Victoria’s western Wimmera region has been appointed the new chair of the GRDC’s Southern Region Panel. 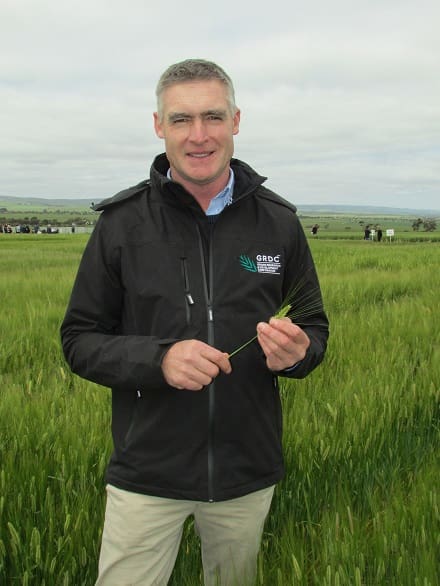 Lawloit grower, John Bennett, will commence as the GRDC’s Southern Region Panel Chair from September 1 this year, assuming the position that has been occupied by Keith Pengilley since 2013.

“John is a highly-respected member of the agricultural community throughout the southern cropping region, and his rapport with growers, advisers, researchers, agribusiness and others within the grains industry is a tremendous asset for both the Panel and the GRDC more broadly,” Mr Woods said.

“Through his new role, John will be influential in his desire to see GRDC investments in research, development and extension (RD&E) that create resilient and sustainable farming systems that deliver more profit to growers and ultimately make agriculture an exciting career path for young people.”

A member of the GRDC Southern Region Panel since 2015, Mr Bennett, his wife Allison and family run a mixed farming operation across diverse soil types between Nhill and Kaniva in the west Wimmera.

Their farming system is 70 to 80 per cent cropping, comprising cereals, oilseeds, legumes and hay.

Mr Woods commended Mr Pengilley on his outstanding contribution to the Southern Panel, the GRDC and the grains industry over much of the past decade.

“Keith has been a leading figure in ensuring that issues of most importance to growers in the southern region and indeed nationally, are addressed through appropriate investments in RD&E that offer solutions to constraints and promote opportunities for profit growth,” Mr Woods said.

“Keith should be proud of the legacy he has created – he leaves behind a Southern Region Panel that is highly effective in identifying grower priorities and advising on targeted investments in RD&E. There would be very few growers throughout the Southern Region who have not directly benefited from his input and commitment to serving their best interests.”