AFTER protracted debate in both the United Kingdom’s Houses of Parliament this year, final Agriculture Bill Commons amendments were agreed in the House of Lords this week, paving the way for post-European Union agriculture.

In addition to the nuts and bolts of creating a system of equity in agriculture, amendments negotiated through the Bill’s stages clarified its intentions on aspects of agri-food standards in future trade agreements.

The UK bill enacted this week provides the legislative framework for replacement agricultural support schemes and a range of powers to implement new approaches to farm payments and land management.

In England, farmers will be paid to produce “public goods”, such as environmental or animal-welfare improvements.

The bill also includes wider measures, including on improving fairness in the agricultural supply chain and on the operation of agricultural markets.

Farmers had, however, called for the previous bill to have a greater focus on food production.

The new bill requires Ministers to have regard to the need to encourage the production of food in England in an environmentally sustainable way.

The peak farmers’ association in England and Wales, the National Farmers Union (NFU) has had much input by direct lobbying and consultation over the several years of bill development.

The NFU has welcomed recognition in this bill that “food production and caring for the environment go hand-in-hand”. 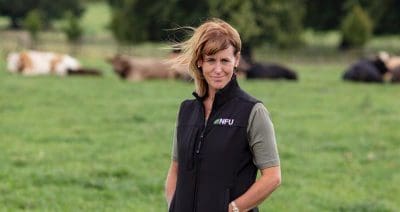 “As the first domestic legislation covering agriculture for over 70 years, this really is a landmark moment for our food and farming industry,” NFU president Minette Batters said.

“Two years ago when the bill was first published, the clear absence of food production and food security troubled many.

“The NFU made the case…that this…legislation needed to recognise the role of farmers as food producers.

“It will also now play a crucial role in ensuring our farmers are not undercut in future trade deals by food imports that would be illegal to produce here.”

Farmers and environmental groups lobbied legislators to maintain food and animal welfare standards for imports under new trade deals, calling for legislation to underpin Government commitments not to reduce such standards in future trade deals.

The final legislation also includes a requirement for a report to be presented to Parliament focusing on the impacts that future trade deals could have on the food and farming sector.

Further amendments to the Trade Bill are expected to assign this responsibility to a statutory Trade and Agriculture Commission.

Enacted as the Agriculture Act 2020, the bill has been modified from its earlier drafts in that it:

The provisions on new farm support schemes mainly apply to England. Powers are included in a Schedule for Northern Ireland to enable preparation of replacement schemes.

Some provisions in the bill apply to Wales (for example to amend Direct Payments rules) but these are intended to be temporary. Notably provisions mirroring English provisions on new support schemes that were in the previous bill have not been included in this bill.

Welsh Ministers intend to introduce in this Assembly term a Wales (Agriculture) Bill.

The Scottish Government introduced legislation in November 2019 which proposes to keep farm support approaches largely the same until 2024.

Aside from farm support, some measures such as those on food security and fair dealing in the supply chain apply to the four nations, while the various measures in the new Part 4 have different applications.

Measures on meeting WTO obligations also apply across the UK.

It is reported that the Scottish Government considers these matters to be devolved, so intends to withhold legislative consent.

A statement from the UK government Environment, Food and Rural Affairs Secretary George Eustice said the Agriculture Bill sets out how farmers and land managers in England will be rewarded in the future with public money for “public goods” such as better air and water quality, thriving wildlife, soil health, or measures to reduce flooding and tackle the effects of climate change, under the Environmental Land Management scheme.

These incentives will provide a powerful vehicle for achieving the goals of the government’s 25 Year Environment Plan and our commitment to reach net zero emissions by 2050.

This new system will replace the poorly targeted Basic Payment Scheme (BPS) subsidy system, which largely pays farmers for the total amount of land farmed, and has skewed payments towards the largest landowners, rather than rewarding farmers for any specific public benefits.

The funds released as a result of the phasing out of the legacy BPS will be re-invested into a roll out of our future farming policy, which will be centred around support aimed at incentivising sustainable farming practices, creating habitats for nature recovery and supporting the establishment of new woodland and other ecosystem services to help tackle challenges like climate change.