ANZ has become the latest lender to be accused of bowing to “creeping social activism” after announcing changes to its carbon policy this morning that tie future funding decisions to action on climate change. 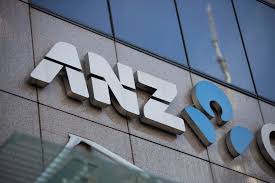 Media coverage of the new policy this morning triggered a backlash from senior Nationals and agricultural leaders, forcing the bank’s chief to clarify that its climate change statement will not impact its farmgate lending policy.

The Australian reported this morning that the ANZ’s new policy will include the introduction of a ‘net zero emissions’ test for loans, saying the bank had stated that it will “move away from working with customers that don’t have clear and public transition plans”.

The policy was seen as placing pressure on farmers, construction firms and customers with ‘material thermal coal exposure’.

Banks are not ‘society’s moral compass’

The news sparked an angry response from agriculture minister and former agribusiness banker David Littleproud who said banks should not try to become “society’s moral compass and arbiter”.

“We can’t let unelected, profit-driven financiers from Pitt Street dictate to society how to produce food and fibre or how we run our economy,” he said.

“Banks have been given a privileged position in our society and our economy and they shouldn’t interfere in markets but simply facilitate them with capital.

“That is their role and they should stick to it.” 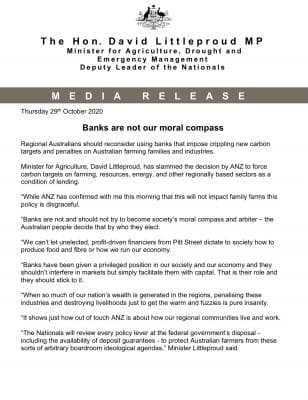 However in comments to a Full Year Results presentation to investors this morning, ANZ chief executive officer Shayne Elliott said the policy applied only to the top 100 carbon emitters and would have no impact on farmgate lending practices.

“You may have also seen some media coverage today suggesting that as part of our updated carbon policy, we will be shifting support away from our farmers.

“I want to assure you that this is absolutely not the case.

“ANZ’s climate change statement is focused on the top 100 carbon emitters, and will have no impact on the bank’s farmgate lending practices.

“We remain firmly committed to supporting Australia’s farmers and producers, now and into the future.

“This is about helping our major agribusiness customers run more energy and capital efficient operations, it’s not about family farms.”

Mr Elliott said the measures announced today were focused on supporting large Institutional customers across all sectors in their transition to a low carbon business.

“I’m proud of the new policy and we’ve been having very constructive conversations with our customers. This essentially this brings us into line with global best practice.

“Our measures also include the allocation of $1 billion of funding towards supporting customers’ and communities’ disaster recovery and resilience, which stands to benefit rural Australia and communities.”

In comments to the Australian this morning, former Deputy Prime Minister John Anderson said “feeding people is in itself a moral value and that should not be oversighted”.

“If the ANZ really knows its oats, it will recognise that agriculture can make an unbelievable contribution and the clever thing to do would be to work with agriculture and not attack it,” Mr Anderson said.

“Beware unintelligent, bull-headed, ideological responses which result simply in making Australia cleaner but poorer and other countries richer but dirtier.”

A statement issue by Agforce this afternoon said there was no doubt that banks had a vital role in agriculture – but managing climate change wasn’t one of them.

“This completely hypocritical and counter-productive move exemplifies a sort of ‘creeping social activism’ we are seeing in the banking industry that is stifling growth and genuine practice improvement,” AgForce CEO and former banker with ANZ Michael Guerin said.

“Banks are the last people who should be lecturing the community about right and wrong.

“These sorts of stunts that single out certain industries to suit ‘activist agendas’ are an irresponsible handbrake on economic and jobs growth when they are most needed; they jeopardise agriculture’s prosperity and sustainability at a time when the industry will be critical to our post-COVID recovery.

“It is deeply worrying that some banks appear to be compromising sensible and appropriate commercial decisions because of intimidation by single-issue activists, in some cases their own senior staff.

“It is vital that banks do not base decisions that affect Australia’s food security and ability to bounce back post-COVID on the views of radical groups that do not in any way represent the opinions of the average Australian.

“If ANZ were serious about reducing carbon emissions – rather than engaging in a meaningless, underhanded stunt to try and divert public scrutiny from the banking sector’s failings – they would work with, not against, primary producers.

“If the ANZ continues to turn its back on agriculture rather than work collaboratively with us we will be left with little choice but to respond in kind.

“The banks need loyal customers as much as farmers need finance.”

Earlier this year it was revealed that animal rights groups are pressuring banks to choke off capital to industries and practices they oppose, with livestock exports, intensive farming and mulesing among their key targets.