ONE of Australia’s newest and youngest billionaires is predicting big changes in the way farmers finance working capital in future. 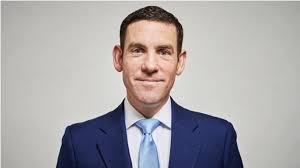 Lex Greensill who grew up in a Bundaberg family farming operation is today recognised as a world leader in the growing area of supply chain finance.

Supply chain finance is an innovative way for large companies to use their strong credit ratings and superior access to finance to help the small businesses operating in their supply chains to also access improved credit and increased cash flow, and at a much lower cost than they normally could.

When we say Lex Greensill is a world leader, you don’t have to delve far into his ‘bio’ to understand why: Growing up on his family’s sugar cane and melon growing farm he recognised the financial pressures many farmers face in having to wait to get paid for their produce from their customers, typically large food retailers (more on his story below). Lex studied law at Queensland University of Technology  and worked with global finance giants Citibank and Morgan Stanley, before starting his own firm in 2011, specialising in providing supply chain finance to help smaller businesses secure increased levels of affordable finance.

The extraordinary numbers since then tell the story: In that time Greensill has extended more than $50 billion of financing to a pool of 1.7 million suppliers in 60-plus countries.

Greensill now also owns its own bank in Germany, and has created the world’s first Supply Chain Finance fund, which today as $3 billion of assets under management.

Recognising the astonishing influence he has had on global financing sector, in 2017 Lex Greensill was named a Commander of the British Empire (CBE) in the 2017 Queen’s Birthday Honours List for his services to the economy. 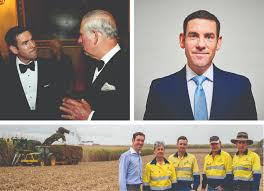 Talking with Prince Charles and with his parents and brothers at Bundaberg.

Lex is also a partner with his two brothers Peter and Andrew in the family’s third-generation sugarcane, water melon and sweet potato farming operation at Bundaberg, which  today produces more than 2000 hectares of crops (including 5pc of Australia’s water melon production) and employs more than 90 staff (see the business’ website https://www.greensillfarming.com.au/).

Despite being based in London, Lex still returns to the family farming operation as often as possible, where he can be found sitting in a tractor cab, telling the Weekend Australian last year “I’m a farmer at heart. And I love it here”.

With Supply Chain Finance a bank is notified by a large company that an invoice has been approved for payment.

The bank is then able to offer a 100 per cent immediate advance to the supplier at lower interest rates, knowing the invoice will ultimately be paid by the large company.

Taken together, this means that leading companies could deliver up to billions of dollars of cheaper finance to their suppliers including many small to medium enterprises.

The concept helps small businesses in two key ways: it improves their working capital and also helps to tackle the issue of late payments, which place a huge strain on cash-flow and inhibit growth.

Large companies have typically have strong credit ratings and excellent access to finance, while the small companies in their supply chains often have relatively more expensive finance, and more limited access to equity capital.

Small businesses generally fund their working capital via overdrafts, invoice discounting or factoring or similar products. These products are generally more expensive than their customer’s cost of credit and provide the small business with an advance rate of around 80 percent – with the rest coming from equity capital.  This makes it relatively more challenging and expensive for SMEs to grow.

With Supply Chain Finance a bank is notified by a large company that an invoice has been approved for payment; the bank is then able to offer a 100 per cent immediate advance to the supplier at lower interest rates based upon their customer’s credit rating, knowing the invoice will be paid.

Greensill recently released a report titled “Farming and Finance” which outlined how supply chain financing could apply to the Australian beef feedlot sector.

The report explains that existing funding models for feedlots provide finance at a single point in time, based on a static view of the value of a cattle herd.

Mr Greensill told the Australian’s Global Food Forum where he launched the report that traditional funding models used by banks left farmers with working capital deficits, even though they had appreciating assets.

“It is another great example of where the value of the supply chain isn’t the real estate that underpins it, but in fact it’s actually the inventory, the work in process, the stock. So the way that supply chain is financed today is incredibly inefficient,’’ he told the forum.

The report outlined how the firm can leverage its supply chain finance technology platforms to recognise the value of the herd as it moves through both backgrounding and feedlot cycles, and dynamically adjust funding levels as the herd value increases.

Why are traditional banks falling short?

Greensill says in the report that existing funding models provide funding at a single point in time and are based on a static view of the value of a herd. This leaves the farmer with a working capital deficit even though they have an appreciating asset.

Greensill says it is able to leverage its technology platforms, along with its partners’ capabilities, to recognise the value of the herd as it moves through both backgrounding and feedlot cycles and dynamically adjust funding levels as the herd value increases.

This unlocks value inherent in the growing herd and provides vital working capital to the farmer.

“We are also reducing risk for Greensill throughout the process as we are able to both support the increase of the herd by funding inputs as well as track the herd through the various stages.”

In a recent address to the Rural Press Club of Queensland in Brisbane, Mr Greensill explained what drove his interest in developing innovative supply chain financing pathways for small businesses. 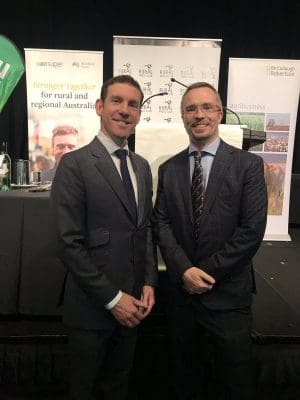 “When I grew up I experienced the sticky fact that most financiers, certainly those outside the rural sector don’t see, and that is that farming is frankly one of the worst financed businesses out there, as a working capital proposition it is terrible,” he said.

“If you think about our sugar business it can be up to three and a half years from the point that we prepare land to when we generate the final piece of income from the crop.

“That is a terrible business to run.

“Compare that with a retailer or to a factory, it is rubbish.

“So that, together with the uncertainty of actually getting paid at all meant that when I was training to be a solicitor I worked with the local fruit and vegetable growers organisation, the peak body now called Growcom, to put in place terms of trade to ensure that farmers got a fair deal when they were dealing with the central markets.

“So having started with that grounding I actually invested in a company which went bust here in Australia, a company called Aussie Com back in the late 1990s, that tried to do just what Greensill Capital does today and that is what we now called supply chain finance.

“That started a  journey and created an inspiration that lead me through doing my MBA in the UK and then building a business, initially at Morgan Stanley, then we experienced the GFC, for those of you who didn’t notice it organisations like Morgan Stanley who were conquering the world suddenly needed to get smaller in a very big hurry, so my team and I went to Citibank and we built a very large franchise there delivering supply chain finance around the world.

“Then in 2011, contemporaneous with the birth of my first child I came back to work after paternity leave and handed in my notice, realising that my being a father didn’t change my view that I thought I could do it better on my own.

“So we have built the firm we have today.”

Mr Greensill explained that the way credit works around the world looks very much like a pyramid, with the highest aggregation of capital of quality credit worthiness at the top, and as you move down the pyramid and down the supply chain, access to capital and the cost of that capital continues to get more expensive and less available.

“So the business that my team and I have built is based on that fundamental insight that given that everything ultimately gets bought by a really, really high quality credit counter party, what one should be doing is not financing based on real estate and the history, but in fact delivering financing based on the future and looking to the cash flows that will pass through supply chains and financing those, because they are both durable and very low risk.

“To use an example…in the UK we actually provide this solution to the UK Government itself, so if you are a supplier to the national health service in the UK we give you the ability to get paid straight away so in their case up to 60 days faster than they would ordinarily be able to get paid, and to have the costs of accessing that capital to be the same as the cost that the Government has to borrow money.

“So there literally isn’t a company in the UK that can access money cheaper than the cost to which we deliver to it to suppliers in the UK.

“In Pounds Sterling that is a cost of a little under 1pc per annum and there are not many companies that are able to borrow money like that, and to do so using our technology which means literally there are no pieces of paper to sign.

“It is entirely online, very much like if you went on your iTunes account and you accept the terms and conditions without ever reading them, that is what we do, the T&C are somewhat shorter with us.”