AN IRRIGATED wheat crop grown by Derryck Mickelborough at Dalby on the Darling Downs has claimed the champion crop award for the second time in a row in the 2022 Royal Agricultural Society of Queensland (RASQ) Crop Competition.

Representing Glenesk Farming, Mr Mickelborough, achieved a yield of 9.997 tonnes per hectare with the Borlaug 100 crop, which was up over 1.2t/ha on his previous entry.

The Bligh Family Trust’s  finished second in that class with a yield of 7.837t/ha, also with Borlaug 100.

He said this feat is even more impressive considering the Dalby grower’s 2021 entry set a record with 8.7t/ha.

“He grew the ceiling yield last year for irrigated wheat and smashed it again by 1.2t/ha,” Mr Speed said. 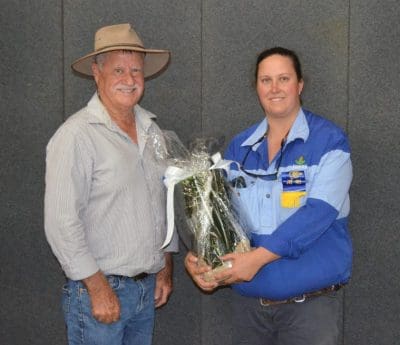 “It was three kilograms shy of 10t/ha which is pretty amazing.”

Mr Mickelborough said he couldn’t pinpoint the cause of yield differences between the two seasons.

“Not a lot was different, in terms of what we did during the seasons,” Mr Mickelborough said.

“I believe the difference must be somewhat seasonal because our approach was not all that dissimilar to the other year.

“We had good underlying nutrition; although we didn’t get to test the soil before we planted, we took a stab in the dark at what our nitrogen was, planted it, and gave it two waters.”

Overall he put the record results down to the variety.

“We used the same variety as the previous year, Borlaug 100, and I think that is the variety to get a really high yield with.”

Mr Mickleborough said, due to the qualities of Borlaug 100 and upcoming favourable weather conditions, he believes it is possible to further increase his yield for the 2023 competition.

“I think there is plenty of room to improve that yield, given the water accessibility, and to aim for 12t/ha.”

Judging for the the irrigated and dryland crop sections included giving points based on yield results, as they compared to the previous highest yield of the crop or ceiling yield.

As with previous years, Mr Speed said the number of entries was down on last year.

He said COVID-19 pressures and weather conditions also contributed to a reduction in entries.

“It is getting harder and harder to get entries purely because of the weather.

“Farmers, to do an entry, have to pull up, and it takes an extra hour or two hours to measure out an area, harvest it and put it through a weigh bin to get an accurate yield result.

“With the threatening weather, it is harder for them to justify that time when they want to have the grain in a silo rather than going through a weigh bin.”

Mr Speed said the organising committee, together with sponsors and seed-company representatives, will be investigating ways to improve entry numbers.

“We are shortly going to have a follow-up meeting in…to discuss what options there are to work out what we can rejig and maybe modernise the competition a bit.

“Most people don’t want to see it falter or fail or close.”