TRADE tensions with China have created uncertainties for Australian grain and cotton exports, forcing exporters of affected commodities to divert trade to the next highest value markets.

ABARES’ December quarter ‘Agricultural forecasts and outlook’ report says while the causes of trade tensions with China appear to lie mostly outside commodity markets, to date exports of barley and wine have been the most affected.

The report says the share of Australian exports to China in 2019/20 varied considerably across commodities, ranging from 10 per cent of wheat exports to 79pc of wool exports.

Australian fibres are more concentrated in China than other exports, while the markets for other exports affected by recently applied tariffs – such as wine and barley – are much less concentrated.

Australian barley exports to China have virtually ceased following the imposition of an 80.5pc tariff in May. 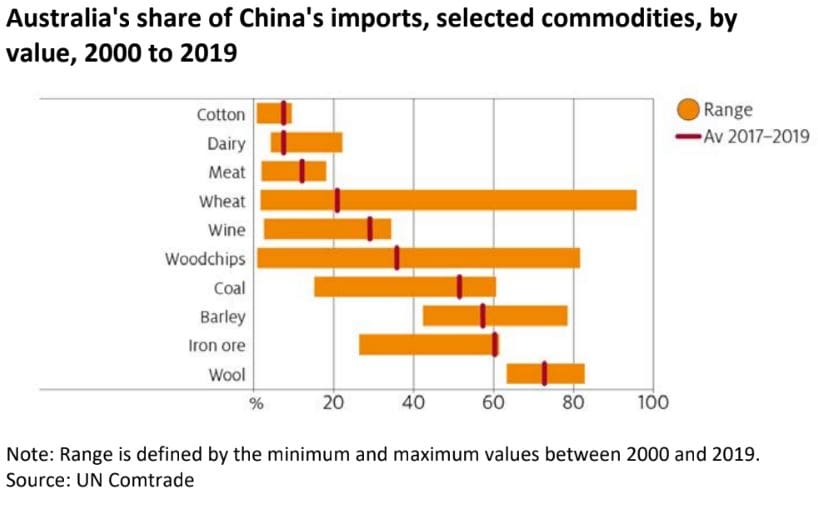 ABARES says Chinese coarse grain consumption is expected to increase by 2pc to 302 million tonnes (MT), supported by the Chinese government’s success in controlling COVID-19 and the ongoing recovery from African swine fever.

Despite near record domestic production, this is expected to be insufficient to meet domestic needs.

A disparity between expected domestic demand and supply has resulted in rising domestic grain prices, increasing demand for imports.

Chinese imports of coarse grains are expected to reach record levels in 2020–21, increasing 49pc year-on-year to 26Mt. As a result of rapidly increasing demand, Chinese national stockpiles are also expected to decline by 4pc to 192Mt.

Continued strong demand for coarse grains, particularly from the United States and China, is expected to outpace production growth and result in a 3pc decline in global stocks to 321Mt, the lowest level since 2014–15.

ABARES says there is potential for China to impose trade restrictions on Australian wheat exports similar to those imposed on barley and other commodities.

Historically, China has not been a significant market for Australian wheat exports.

High domestic grain prices are expected to result in China’s total wheat import demand being the highest in 25 years, at 8Mt in 2020–21.

This demand is likely to be met by wheat exports from the United States and the Black Sea region.

Smaller exportable surpluses from these major exporters will provide Australia with an opportunity to meet demand in other markets.

The increasing use of protein meal for stockfeed is expected to increase soybean and canola demand.

China has sourced record volumes of soybeans from Brazil in 2020, assisted by a weak Brazilian real.

Since Brazil’s marketing year has ended and the US marketing year is underway, Chinese demand for US soybeans continues to increase, driving a recovery in US exports.

Large purchases of US soybeans by China are projected to continue into 2021, increasing the likelihood of China meeting soybean purchasing targets as part of the phase one trade deal with the United States.

Opportunities and challenges for cotton

From 2017 to 2019 an estimated average of 49pc by volume of Australian cotton exports went to China, representing an average of 24pc of China’s cotton imports.

During the same period, Australian cotton exports to Indonesia, Vietnam, Bangladesh and Malaysia accounted for a further 32pc of total exports on average.

Uncertainty has been cast over export sales to China with reports of orders to cease purchases of Australian cotton.

If Australian cotton exports to China were to cease, Australian exporters would need to divert cotton to alternative markets, likely accepting a price discount in doing so.

Discounts are significantly lower than this average in the larger alternative export markets such as Indonesia ($2), Bangladesh ($10) and Vietnam ($20).