Flour and bread mixes are meeting unprecedented demand in panic buying tied to concerns about COVID-19.

DEMAND for flour is going through the roof as consumers stock up to eat and bake more at home, all part of social distancing to minimise the spread of COVID-19.

In the malting sector, demand appears to be steady as packaged beer sales tick upwards in a move brewers hope will offset the drastic drop in over-the-bar business already seen.

For stockfeed millers, demand also looks to be unchanged as this sector takes the same kind of precautions human-consumption grain-processing plants are taking to minimise the possibility of COVID-19 affecting their workforce.

Homestyle Bake in Toowoomba is a major retail and food-service supplier in south-east Queensland, and director Lindsay Weber said the business put on an extra shift on Monday for its six days per week of production to cope with ballooning demand.

“It started with dry goods, it moved last week into meat, and now it’s moved into fresh perishable products.

“We saw demand lift at the end of last week, and we don’t really know how long it will continue for.

“We’ve been asked by our suppliers to provide additional stock next week.”

“We are hearing today some market information that there has been some softening in consumer demand, and crowds aren’t as big as what they’ve been.”

Mr Weber said truck drivers, distributors and staff at the bakery have all risen admirably to the challenge of increased demand.

“We appreciate the support from our employees and contractors.”

He said Homestyle Bake was implementing as many guidelines as possible to minimise the possibility of COVID-19 getting into the workplace.

“Being a food manufacturer, we already have a lot in place like regular handwashing, and we’ve had extra training sessions about hygiene and staying away from work if you develop any symptoms.”

Homestyle Bake is a major supplier to junior sporting clubs for weekend fixtures, and he said the cancellation of events was noted in its orders.

“That demand has well and truly been taken up by others.”

Baking Association of Australia executive officer Tony Smith said Australia’s bakeries large and small have not encountered any problems with stock as they ramp up production to meet consumer demand.

“All the bakeries are firing on all cylinders,” Mr Smith said.

“To date, we don’t have any problems with bakeries or supplies.”

Mr Smith said independent and franchised bakeries had seen increased demand as customers looked to their local shopfronts as an alternative to buying from major retailers.

“The public seems to be supporting local businesses, whether it’s local butchers or bakers.”

“People are buying more bread rolls and pizza bases, whatever they can now that they are preparing and eating more food at home.”

Laucke Flour Mills general manager Peter Cobb said demand for bread mix and flour was “right up there” as a result of COVID-19.

“Our direct-to-consumer products are in very high demand, and that’s been evident for several weeks.”

“The emerging trend is that as supermarket supply becomes erratically available, the trend to bakeries and grassroots manufacturers is increasing.”

While the downtrend in business at cafés, restaurants and food-service use was evident, Mr Cobb said some bakery sectors were seeing a rise in demand.

“There are a lot of swings and roundabouts.

“Flour mills are flat out, and we’re seeing a lot of changes at the supermarket coalface.”

Mr Cobb said supply chains more than food manufacturing were being impacted by volatile changes in demand at the consumer level.

“The food manufacturing community is trying to reinforce stability and calm as much as practical.”

“It’s not like Australia is going to run out of food.”

“We’ve got heaps of supply in Australia.”

Laucke operates two mills, one at Strathalbyn in South Australia, and the other at Bridgewater On Loddon in Victoria.

“Our output has more than doubled and close to tripled to cope with demand from home consumers.”

“We are utilising every aspect of our spare capacity.”

Mr Cobb said lifts in demand were being seen for bread mix in supermarkets through to 12.5 kilogram and 25kg bags of flour used in bakeries right up to 44-tonne bulk tankers.

“Into the bakery and food-service sector, there’s twice the current volume, and we’re working around the clock.

“We normally run multiple shifts, but we’ve turned on every pipe that was available.

“There’s no problem with grain supply.”

Most flour mills buy grain on a harvest-to-harvest basis from growers, and Mr Cobb said Laucke was having no problem in sourcing extra tonnage for nearby milling requirements.

“We have ongoing relationships with farmers, and we manage our grain supply with regular conversations with them.”

In response to COVID-19 and its impact on the retail landscape, Manildra Group managing director John Honan said the company was committed to continuing to operate its food production facilities around the clock to meet demand.

“We continue to work with retailers and wholesalers to locally produce 100pc Australian flour, sugar and oil ranges to restock the nation’s supermarket shelves,” he said. 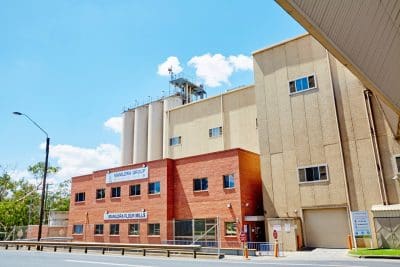 The Manildra Group’s Manildra facility is the largest flour mill in Australia, and like all flour mills across the country is working flat out to supply increased demand caused by shoppers’ concerns about COVID-19. Photo: The Manildra Group

Australia’s stockfeed mills range from small independent operations to large corporate ones owned by the likes of Ridley Ltd, Riverina and Ingham’s.

Stock Feed Manufacturers’ Council of Australia (SFMCA) executive officer Duncan Rowland said SFMCA members were changing operations where possible to maintain as much efficiency as they could while minimising the risk of COVID-19 in the workplace.

“What we’re doing as an industry is what any other manufacturing enterprise in Australia is doing, and that means split shifts and social distancing.

“We’re looking at how we maintain social distancing between end-users and deliverers, and how we separate staff on site.”

Mr Rowland said some SFMCA members were shutting operations after each shift to thoroughly clean the workplace with extra measures like wiping down keyboards before the next shift started.

In administration, on-site workforces in some cases were being halved to alternately work from home one week and from the office the next.

“Stockfeed is part of the human-food supply chain, and we need to keep food on the shelves.”

“The food supply-chain is in place and operational, and measures to do with COVID-19 have been implemented.”

Coopers Brewery is Australia’s largest vertically integrated malting-and-brewing operation, and the company yesterday advised Grain Central it had no plans to change production because of COVID-19.

Capital Brewing at Fyshwick in the ACT is Australia’s ninth-largest and fourth fastest-growing independent craft brewery, but growth across the sector has been stopped by COVID-19.

Started in 2017, the business uses more than 300t per annum of Cryer Malt, and produces around 1.2 million litres of beer for the south-eastern Australian market. The company sells 65pc of its product as canned beer, with the balance being sold through kegs in its taproom and in off-premises pubs.

Capital Brewing managing director Laurence Kain said the company has seen a minor increase in bottle-shop sales, but beer demand across the bar in its taproom and in pubs was down markedly.

“We’ve got a 998-head capacity venue here in Canberra, and coronavirus has had a very dramatic impact on us here and our casual workforce of 30 people.”

Capital Brewing has more than 30 full-time employees, and they have dropped to 0.8FTE positions.

He said the company always held enough raw materials to cover its brewery for six weeks, and regularly holds four weeks’ worth of stock.

“What we’ve done is segregate our production team into three groups, with two separate teams in cellar and wort, and an independent packaging team.”

Staff which do not need to be on site are working from home.

“As soon as we got a confirmed case in the ACT we moved to that.

“We lose a bunch of efficiency, but we wanted to do what we felt was essential for our staff and our customers.”

Mr Kain is reservedly optimistic about the business over the coming months.

“If you’ve got sensible business management, you’ll get through, but it’s hard to plan with such uncertainty.”

Grain Central contacted GrainCorp as Barrett Burston Malting’s parent, and Malteurop at Geelong for comment, but neither were able to respond in the given timeframe.