FARMERS on South Australia’s Upper Eyre Peninsula (EP) are facing widespread crop failures and a fodder shortage in conditions which are replicating those in much of New South Wales, and a local fund is in place to provide them with hay over coming months. 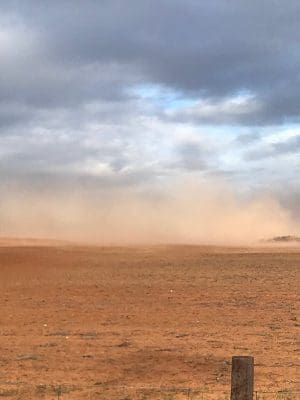 Established by EP Integrated Commodities (EPIC) principal, Steve Whillas, and Mentally Fit EP, the fund is calling on growers, contractors and community members on the Lower EP, where seasonal conditions are good, to step up first.

“The Lower EP is looking as good as it’s ever looked, and the Upper EP is the worst I’ve seen it in my grain-marketing years,” Mr Whillas said.

While the Lower EP was forecast to achieve barley and wheat yields 10 per cent higher than last year,  Eastern and Western, or Upper, EP were forecast to see yields cut considerably from those of 2017/18.

Windy conditions this week will cause further yield loss.

Mr Whillas said baling contractors and four large-scale EP farmers had already pledged their straw from the upcoming harvest to help producers on the Upper EP.

“The desperate areas are Arno Bay, Cleve, Cowell, Darke Peak, Rudall, and pockets out to Ceduna,” Mr Whillas said from his base at Kimba.

South Australia is a large-scale producer of hay for export and domestic use, but drought-driven demand from NSW livestock producers has reduced reserves in its major production area north of Adelaide.

That has made hay from the Lower EP the only practical source of fodder.

“Grain has pretty well run out here, apart from some which has been held on to for seed.

“Anything in grower hands has pretty much been consumed, and hay from the Yorke Peninsula and Mid North has been costing us $300 per tonne landed.” 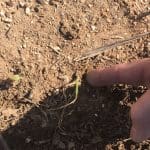 A struggling cereal seedling at Cleve on the Eyre Peninsula. Photo: Nufarm EP

The EPIC-Mentally Fit EP partnership has also called for agistment for sheep, donations, and requests for assistance from Upper EP farmers who are struggling with what for some is a complete season failure.

Funds collected will go to buying feed, baling and freight.

A Rabobank account has been established to accept donations. Details are available on the Mentally Fit EP Facebook page, or by contacting Steve Whillas at EPIC.