HARVESTERS have been going flat out across southern Queensland this week as growers try to take off as much of this year’s winter crop as they can before forecast heavy rains hit on the weekend.

Some areas have already had storm rains over the past few days that have halted harvest, with reports of hail causing damage to some crops in the Roma, St George and Goondiwindi regions.

AgForce grains president, Brendan Taylor, said with maybe half southern Queensland’s modest winter crop harvested, growers were anxiously waiting to see the extent of the rainfall predicted for the weekend.

“The rain so far has been very patchy. Some places have had no rain at all yet. There have been narrow storm cells so far and some hail that has done a lot of damage. There is still harvesting going on with a lot of crop to come off yet,” he said.

“Some of the later, June-planted crop is not ripe yet. It is close, but wants another week of hot sun on it to mature.

“People have been harvesting over-moisture grain, concerned about the coming weather. They can find a buyer who is willing to buy it wet and put it straight through a mill, otherwise you have to put it through a grain dryer.” 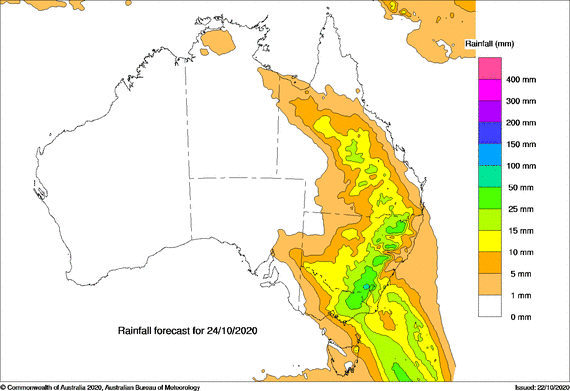 Figure 1: The Bureau of Meteorology’s rainfall map for tomorrow shows the substantial rain front that is expected to disrupt harvest throughout the eastern Australia cropping regions over the weekend.

Mr Taylor said many Queensland growers had produced only modest winter crops due to the dry season and were now looking to sow a substantial summer crop, so there were probably more people looking for rain than not.

“The perfect scenario would be that we get just enough rain now to get the ground wet enough to plant summer crop, but not delay the winter crop harvest too much,” he said.

“If we get 40-50 millimetres over the weekend and then it clears, that shouldn’t damage the winter harvest but should be enough rain to stimulate summer crop planting. A week or so’s fine weather would dry the ground so they could get back into harvest.

“The thing that would be detrimental to the winter harvest would be a prolonged wet period of a week of wet weather. That is when there would be serious crop downgrades, discolouration and sprouting.”

“There are a lot of bare paddocks out there waiting for sorghum. A little bit of sorghum was planted early in September when there was enough moisture to get it up. It hasn’t had any rain since it was planted and is looking for rain now,” he said.

Mr Taylor said in Central Queensland, where harvest was all but finished, the winter crop had been “very ordinary” and growers would be hoping for substantial falls from the weather front that was predicted to cross the area this weekend.