■ Recent late rainfall, however, offers renewed hope to producers in WA, parts of SA and the eastern states FARMERS are bracing for a tough winter after autumn rains eluded much of the country, hindering crop planting and pressuring livestock producers moving into the colder months, according to the latest Rabobank Rural Confidence Survey released today.

However, recent widespread rainfall across Western Australia and parts of South Australia and the eastern states has offered hope of some reprieve for agricultural producers for the year ahead.

Rabobank Australia chief executive officer Peter Knoblanche said the grain sector posted a small decline in confidence, though remained the most positive sector in the survey.

“In the grains sector, sentiment all hangs on the state of the season, and where growers were unable to fulfil planting intentions, this would be at the forefront of their mind with the price outlook a secondary consideration,” he said.

“While last season’s harvest is wrapping up and the next season is some time away, growers are facing the prospect of low to no water availability unless significant rain falls in the catchments,” he said.

Confidence was also comparatively subdued in the sugar sector, with 48pc of surveyed sugar producers expecting agricultural economic conditions to worsen over the coming 12 months – largely on the back of price concerns with the current glut of global sugar.

“All eyes are on India’s huge crop and how they will find a home for it in the export market,” Mr Knoblanche said.

“The major concern facing exporters, such as Australia, is that this sugar could be pushed on to the export market at a time when the world doesn’t need more sugar.”

While the latest quarterly survey of 1000 Australian farmers found an uptick in overall rural confidence in the nation, sentiment remained at low levels – with the rural confidence index edging up to a net reading of -1 per cent, from -11pc last survey.

Mr Knoblanche said while some areas of Australia had welcomed good rains in early May, many key agricultural regions had struggled through a severely dry autumn, waiting for the seasonal break to replenish well below-average soil-moisture levels and depleted water catchments, after such a prolonged period of dry weather.

“This will have been weighing heavily on farmers as the winter cropping season began and as livestock producers moved into winter with poor pasture growth and low dam levels,” he said.

However, Mr Knoblanche said, recent weather fronts which had moved across the continent in the past week to 10 days had brought late widespread rain to much of WA – offering hope to many in the state’s cropping regions – and also bringing much-needed additional rainfall to parts of SA and some areas of the eastern states.

“There are also a number of positives at play for the agricultural sector, including improvements in some commodity prices, such as dairy and wheat, and a softening in the currency,” he said.

The latest survey, completed last month, found the number of respondents expecting conditions in the agricultural economy to improve in the coming 12 months had risen slightly – to 27pc, from 22pc in March 2019.

The number of farmers with a pessimistic outlook fell back slightly to 28pc (from 33pc in the previous quarter), while 36pc indicated they expected the agricultural economy to remain stable in the year ahead.

Drought was still the primary concern for farmers. Of those who had a pessimistic outlook on the coming 12 months, drought was cited as a key concern by close to three quarters.

Mr Knoblanche said this was unsurprising with some areas of WA experiencing their driest five months on record (to May) and parts of SA having their driest start to the cropping season in more than 100 years. And with no drought-breaking rainfall across much of New South Wales and southern Queensland.

With Rabobank forecasting a sub-20-million-tonne wheat crop, based on current conditions, Mr Knoblanche said there were areas in southern NSW and Victoria which had received a decent autumn break and crops were emerging well.

“And other cropping regions in WA and SA will hopefully also now get a chance from this late break,” he said.

Although overall rural confidence remained subdued, all states except WA had posted an improvement in sentiment in the survey, with Tasmania reporting the largest upswing as good seasonal conditions prevail across the state’s north.

WA – after reporting stronger rural sentiment than the rest of the country in recent surveys following a bumper 2018 season – had posted a decline in sentiment, off the back of the state’s dry autumn.

Mr Knoblanche said it had been an extremely dry start to the year in WA, and farmers had been anxiously awaiting autumn rains as they entered the cropping season with severely-depleted soil moisture levels.

“However, the late arrival of widespread rains over recent days could be game changing for agriculture in the state. In particular, they’ve brought a desperately needed late break for most cropping regions – particularly the western half of the wheatbelt – and will also have eased the pressure on graziers with regards to water,” he said.

Mr Knoblanche said there was now some potential for an average crop for some parts of the WA wheat belt.

Meanwhile Victoria, Queensland and NSW all reported an upswing in sentiment – albeit from a low base – and sentiment remained subdued in Queensland and, to a lesser extent, NSW.

In Victoria, Mr Knoblanche said, confidence had climbed to its highest level since late-2017, as widespread rains in early May had enabled growers to get their crop in, with follow-up rains received since.

However, for Queensland, Mr Knoblanche said, the southern cropping region remained dry, but there had been good opening rains in the central Queensland grains belt. While in the Channel Country, there had been substantial flows as a result of the floods.

“There is no doubt it will be a long road to recovery for those devastated by the floods in North Queensland earlier this year, as graziers rebuild herds and undertake the mammoth job of repairing the damage to their fences and water infrastructure,” he said.

The survey found drought concerns to be particularly heightened in NSW, with nine out of 10 farmers surveyed in the state citing drought as reason conditions were likely to deteriorate further. And much of the central and northern parts of the state remain extremely dry.

In SA, Mr Knoblanche said, there had been little change in overall farmer sentiment, with rainfall relatively patchy, although good falls had seen confidence increase strongly in the south-east of the state. “Further rainfall over recent days will also have given SA farmers some more cause for optimism,” he said. 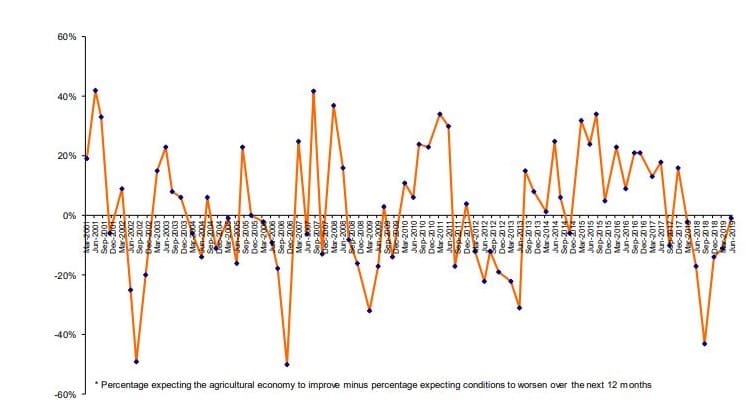 Signs of an improvement in sentiment were apparent across most commodities, though with confidence remaining at subdued levels, particularly in cotton and sugar cane.

Seasonal conditions saw confidence among grain producers post a small decline, though the sector remained the most positive in the survey.

In contrast, sentiment was relatively sound in the sheep sector, with 71pc of sheep graziers expecting conditions in the agricultural economy to improve or remain similar to last year. While in beef, confidence levels were slightly more subdued.

“For graziers, confidence is being largely held up by the market, with prices for lamb at record levels for this time of year,” Mr Knoblanche said, “and this is alongside the continued strength in mutton and wool markets.”

While in beef, young cattle prices are proving to be highly susceptible to the season, he said, rising in late March on the back of some rain, but dropping back down in May as producer demand proved insufficient to hold up prices. This trend, he said, was likely to continue into spring.

But, Mr Knoblanche said, it was the dairy sector which saw the biggest lift in confidence, albeit from low levels, signalling early signs of a recovery in dairy farmer sentiment.

“Processors have come into the market with strong milk price signals for the 2019/20 season, and while this has started to drive that lift in farmer sentiment, it has been somewhat muted by the elevated input cost environment for feed and water,” he said.

While farmer confidence posted some improvement this quarter, investment appetite among farmers was little changed.

A total of 19pc of survey respondents indicated they were looking to increase investment in their farm businesses over the next 12 months, while a further 64 per cent intend to maintain investment at current levels.

Investment intentions appeared particularly strong among larger farm businesses – those with a gross farm income over $1 million – with 32pc of farm businesses in this category looking to increase investment.

The nation’s farmers also revised up expectations for their gross farm incomes in 2019/20.

A total of 24pc of surveyed farmers were expecting an improvement in gross farm incomes (up from 21pc in the previous survey) and the percentage expecting a weaker financial result fell back slightly to 32pc (from 34pc).

A total of 40pc expected a similar income to that generated in the 2018/19 financial year.

This quarter, the survey also questioned farmers about their uptake and use of sensor technology, such as drones, moisture probes, yield mapping, EID (electronic identification) and auto drafting. This topic was last asked about in the survey in June 2017.

Mr Knoblanche said although the uptake of sensor technologies was found to have remained reasonably low, at 23pc of those surveyed (in line with its usage level two years ago), there were more farmers ‘looking into it’ (16pc, up from 9pc). The application of sensor technology was also found to be much higher in larger farming businesses (at 45pc).

Of the farmers who had sensor technology in place, the survey found 68pc were using it to support decision making (a similar percentage to June 2017) and 51pc had found the sensor data-based decisions had increased profitability (up from 37pc).