RABOBANK’S senior commodities analyst Cheryl Kalisch Gordon urged growers not to be complacent and take steps to ensure their margins are secure as she believes input costs will increase.

Dr Kalisch Gordon gave an update on global commodity trends at a Rabobank event at Cecil Plains, west of Toowoomba this week.

“All of these things are key factors that I see playing out over the course of this decade and contributing to higher prices on average into the future,” Dr Kalisch Gordon.

She said the Ukraine-Russia conflict has exacerbated Australia’s substantial shift away from traditional markets.

“We are moving in paths of trade that are quite different to the 20 years before that meant we benefited from free trade and efficient supply chains based a lot around China.”

It is this deglobalisation that Dr Kalisch Gordon said will also contribute to further driving the need for lower-carbon cropping.

“We are moving into a world which expects a decarbonised progression in supply chains.

“We are moving into more trade with the likes of Europe and the US as our allies, and those are the countries that are most demanding decarbonisation, so that compounds that effect in Australia.”

She said the data is also clear when it comes to the increased pressures of climate on crop production, with higher instances of droughts, flooding and other natural disasters on the horizon. 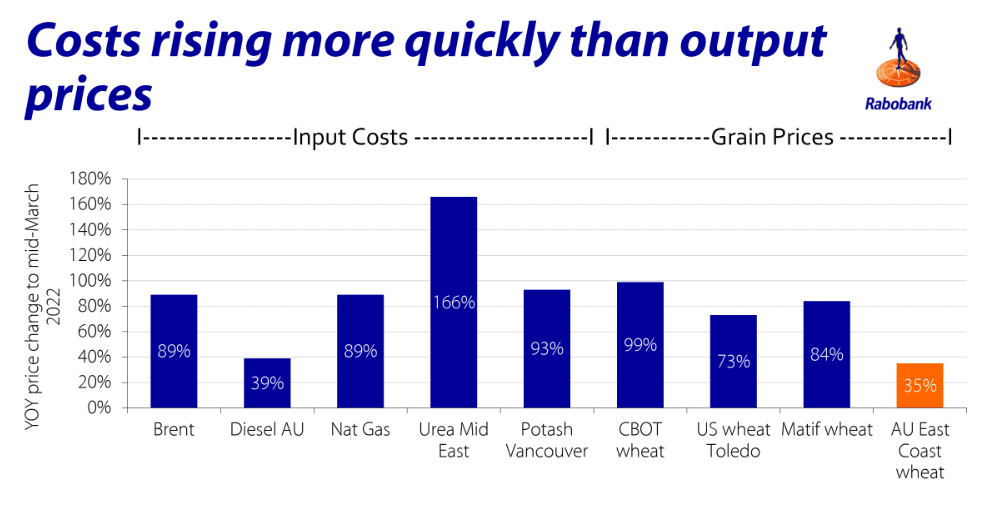 Growers should not be complacent when it comes to protecting their margins. Source: Rabobank

“We don’t expect that prices will return in this year and next to the average pricing that we would have seen before January 2021.

“A lot of that has to do with global energy prices, but also  with the supply challenges with what is coming out of that Black Sea area.”

She said, while urea and potassium prices may plateau, potash is the biggest concern.

“We think that is the one that has a long way to go before the world can readjust and work out alternative sources – if they can.

“We will absolutely be waiting on Canada to bring on some new capacity to really soften that market.”

Dr Kalisch Gordon said supply chain constraints and a record crop have worked against Australian farmers by resulting in lower prices than those realised on the global market.

She said Chicago Board of Trade (CBOT) Wheat prices were forecast at about US750 cents a bushel but instead it is now predicted to trade at over 1000c/bu over the next 12 months.

“The March CBOT Wheat prices translated to AU$717 a tonne, but no one was getting that price.

“If we look at other regions in the world, France and Argentina for example up between 30 to 50 per cent on pre-Ukraine-Russia conflict levels; meanwhile, locally, it was 11pc.” 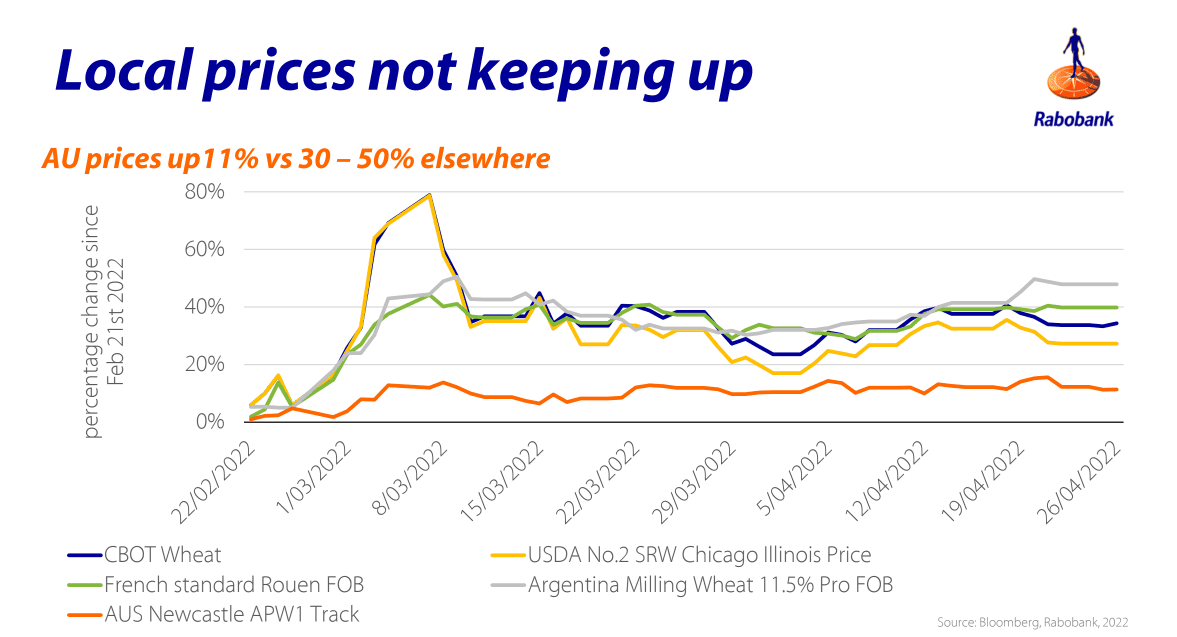 The percentage change in Australian wheat, using the Newcastle APW1 track, is far below those of other countries. Source: Rabobank

She said, due to the high supply, limited shipping capacity and market risks, people are willing to sell their wheat at $400/t which means traders don’t have to offer a higher figure.

“We are running behind global metrics, and we expect it will continue to be the case over the course of this year.

“We think it will maintain pricing at $350-400 over the next couple of months and fall to $330 by the end of the year,” she said in reference to APW track market.

“It’s still good pricing but it is not going to keep up globally because of that strong supply that we’ve seen from last year.”

The immediate future for cotton appears brighter, with the current high prices set to continue in the short term.

Dr Kalisch Gordon said the longer-term outlook on cotton is concerning with the market historically connected with global consumption and volatility.

The International Monetary Fund (IMF) World Economic Outlook released this month detailed that global growth would slow from an estimated 6.1pc in 2021 to 3.6pc in 2022 and 2023.

“If we look at the historical relationship between cotton consumption and GDP growth, it is a fairly strong relationship.

“When the IMF says we are going to drop below 4pc growth, it tells me we are on track for a drop in cotton consumption.

“Fortunately, I don’t think it’s going to flow through to pricing in the short term.” 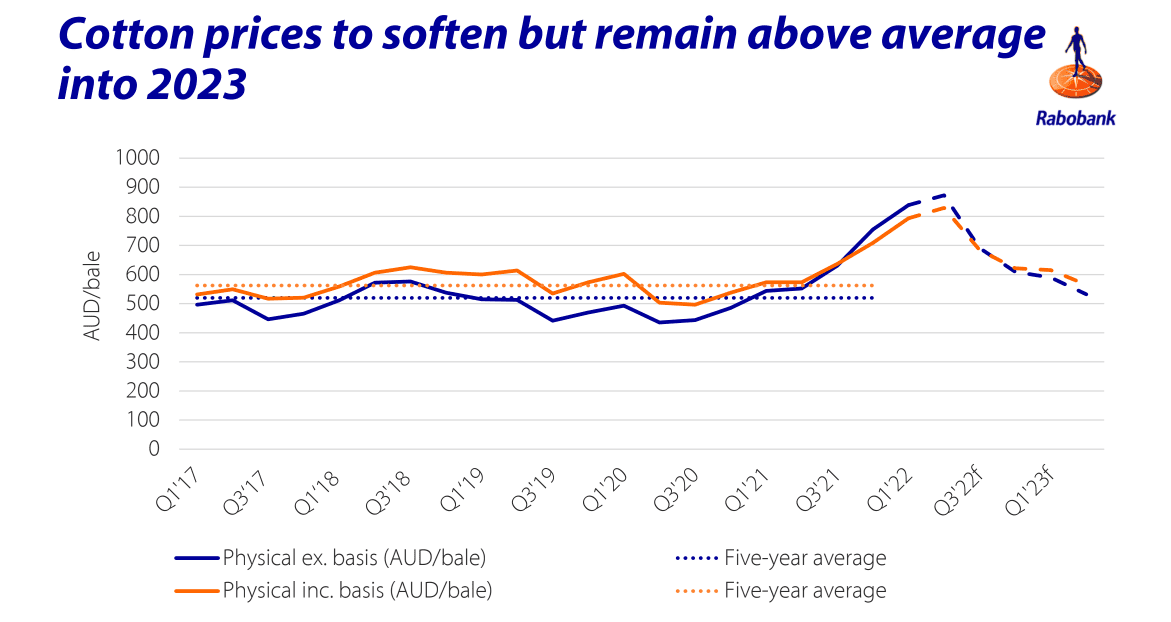 Rabobank is forecasting a drop in cotton prices into 2023. However, prices should remain above average. Source: Rabobank

She said the continuing drought in US alongside supply deficits from previous seasons with help to keep prices higher.

“I think we can hold on into 2023, but beyond that in 2023-2024, I have some grave reservations in terms of pricing, just due to that severe drop in global consumption that we might expect and the fact that we will have those inventories that have been built during this period.”