A MAJOR heavy-vehicle route linking the Newell Highway to GrainCorp’s storage at Wirrinya in central New South Wales has been completed to allow more direct access for road freight to and from the site south of Forbes. 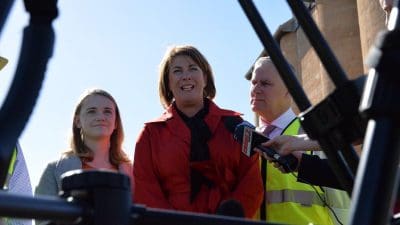 NSW Minister for Transport, Melinda Pavey, at the completion of the Newell Highway to Wirrinya Upgrade.

The upgrade has been funded by the NSW and Federal governments, with contributions from the Forbes and Weddin shire councils.

Parliamentary Secretary for Western NSW, Rick Colless, said a 12.6-kilometre section of the road had been upgraded with widening, strengthened culverts, and realignment of intersections and rail crossings to allow access for an increased number of heavy vehicles.

“The upgrade will allow B-doubles, road trains and other heavy vehicles to use the road as a direct route between the Newell Highway and Wirrinya,” Mr Colless said.

Member for Cootamundra, Steph Cooke, said the road was narrow and in poor condition prior to the upgrade.

“The upgrade has created a more direct heavy-vehicle route which represents a distance saving of up to 37 kilometres per trip for those trucks which will no longer need to travel through Forbes or Caragabal,” Ms Cooke said.

NSW Minister for Roads, Maritime and Freight, Melinda Pavey, said the upgrade was part of the Restart NSW Fixing Country Roads program, which had allocated in excess of $200 million to more than 200 projects across the state.

Local Nationals’ MP and Deputy Prime Minister Michael McCormack said the Federal Government provided $800,000 to the project under Round 5 of the Heavy Vehicle Safety and Productivity Program (HVSPP).

“The Newell Highway is a critical freight artery for the Riverina and Central West, as well as one of Australia’s busiest highways,” Mr McCormack said.

“The Newell Highway to Wirrinya Heavy Vehicle Route upgrade will strengthen the regional freight network for the Central West, providing a vital transport link for the grain and livestock industries.”

“The creation of a more direct route for those trucks reduces transport costs and increases freight efficiency and productivity, supporting growth of the local grain industry,” Cr Miller said.

In response to drought conditions in northern NSW and Queensland, Wirrinya and surrounding districts has been supplying grain to the domestic market, instead of sending most of it to export through Port Kembla.

The upgraded road will assist in further private and trader sales to graziers and end users accessed via NSW’s main road-transport artery, the Newell Highway.

Weddin Shire mayor, Mark Liebich, said the project would also provide benefits for the transport of livestock and agricultural supplies.