Around $5 million will be spent over the coming year on projects using cutting-edge science to help boost Australia’s biosecurity capabilities. Photo: DAFF

A DIAGNOSTIC tool using nano-technology to rapidly detect high-risk plant pests and pathogens in the field will undergo feasibility testing in a biosecurity innovation pilot kicking off this month.

The lab-on-a-chip project will investigate if portable nano-biosensors improve the efficiency of plant disease detection at Australian borders and in-field surveillance.

Once the technology is proven a handheld prototype will be developed for use by frontline biosecurity officers.

Department of Agriculture, Fisheries and Forestry Deputy Secretary of Biosecurity and Compliance Chris Locke said the pilot was one of up to 24 innovation program pilots funded this year.

“It can be a time-consuming, lengthy and costly process. 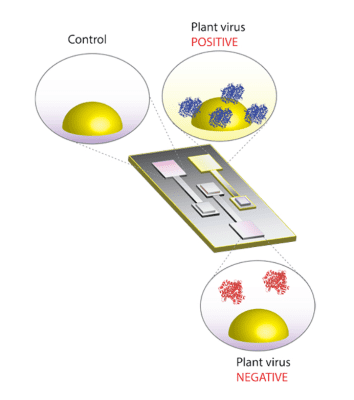 If the technology proves successful, a hand-held diagnostic tool will be developed, giving officers the ability to test suspect pathogen samples on site. Photo: DAFF

“If this technology works, it means our biosecurity officers can take a sample from a suspect plant.

“Then, using the nano-device, identify the specimen by detecting a pest’s or plant’s RNA (ribonucleic acid) while still at the airport, port or in the field.

“This technology will significantly help the clearance rate of goods at our border, often held up waiting on test results.”

Nano-biosensors are currently used in the medical field to diagnose infectious diseases and conditions, such as cancer.

Project research will take place at the department’s Plant Innovation Centre at the Post-Entry Quarantine facility in Melbourne.

A tandem line of research will be undertaken by the NanoBiotechnology Research Laboratory at RMIT University also in Melbourne.

A second project will investigate the use of nano-fabricated microneedles in conjunction with the biosensors.

All samples taken must be purified.

Microneedles use Micro-Electro-Mechanical-Systems (MEMS) to extract cell contents from a suspect plant.

This is then placed in the nano-sensor and scanned.

The microneedle research component will be conducted by the University of Southern Queensland.

Dr Cooke said reducing the time to detect and respond to risks at the border is imperative.

“Being able to rapidly detect and confirm pathogens on-ground could improve response times to biosecurity risks, thwart incursion spread and speed up the clearance of imports.”