Mice on the march through southern/northern farming regions

MICE numbers are rebuilding across southern farming regions and are emerging as a looming problem in northern farming zones as farmers gear up for this year’s winter sowing programs. 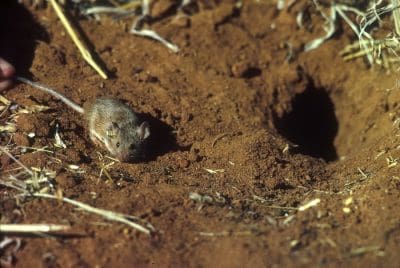 Grain Producers Australia chairman and Victorian Wimmera farmer, Andrew Weidemann, said there were reports of increased mice activity, particularly in northern Victoria where numbers were on the rise.

“Their numbers are increasing in the northern parts of the Wimmera and Mallee. We are all waiting to see what happens,” he said.

“The dry weather has, to some extent, stopped them from breeding. It will be interesting to see what happens when it gets cold and wet as to whether the numbers explode like they did last year.”

It was a similar story in South Australia where Grain Producers SA chair, Wade Dabinett, said there were already signs mice would be a threat in cropping regions again this year.

“The numbers of mice haven’t dropped away. We have more than what we did last year. Those growers who aren’t getting themselves ready to deal with mice are going to be in for a surprise,” he said.

“It depends on what type of farming system you are in, but if you had some level of mice last year my guess is you will have them worse this year.”

CSIRO researcher, Steve Henry, said he recently ran a survey from Coleambally in southern New South Wales through to north western and western Victoria, and on to South Australia’s Adelaide Plains and Yorke Peninsula, that showed high levels of mouse activity. 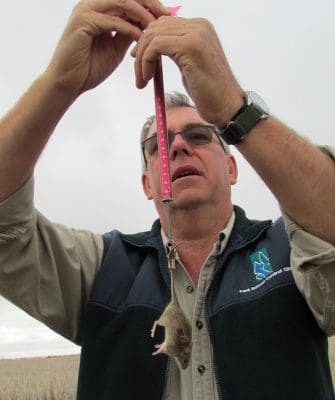 “At Walpeup (in Victoria’s Mallee) we saw some pretty big numbers of around 80 per cent trap success. Each night we had 102 traps set and we were getting between 70 and 80 animals per night, which are really big numbers,” he said.

“Then, as we headed south to Horsham from Hopetoun, while there were some paddocks that have really huge numbers, it was quite patchy in its nature. But we were still seeing some pretty big numbers in some areas.”

Mr Henry said mouse numbers had been bubbling along over summer and producers had been spreading bait throughout.

“There was a lot of bait flown on to canola late in the season last year. This has continued on through the summer

“People who are pulling up grain bags in paddocks are finding all ages from pink babies in the nest to big fat pregnant females. It is interesting that we didn’t trap any pregnant females and the proportion of adults caught was very low. There are still a heap of animals there right on the point of being ready to breed.”

Mr Henry said the high mouse numbers of the past 18 months was a carryover from the bumper 2016 harvest.

“There was a huge amount of food left behind for months after the harvest. It was a huge crop. There were some really big barley stubbles that masked the signs of mouse activity,” he said.

“So, we got right through to the 2017 sowing and some people pulled into the paddocks to sow the crop, couldn’t get their machines through the stubble, burnt the stubble and found all the mice. At that point it is really too late to deal with them.”

Populations on rise in north

Mr Henry said mice has not been such a problem in the northern farming regions last year, but were now emerging in significant numbers.

“Once you get up into the dual cropping zones they haven’t had a mouse problem for the last couple of years. We are starting to get reports of reasonable numbers up there,” he said.

Mr Henry said the key recommendation was for farmers to get out and go for a walk to closely inspect their paddocks.

“Just get out of the ute and go for a walk across the paddock, because if you drive past at 20 to 30 kilometres per hour you are going to miss some of the critical signs. You certainly can’t tell an active burrow from an inactive burrow at that speed. Go for a walk and work out what the magnitude of the problem is,” he said.

“If you are concerned about the number of mice that you have four to six weeks out from sowing, do an application of bait. Then continue to monitor through to sowing.

“If you are still concerned at sowing, bait straight off the back of the seeder so you apply bait as you sow the crop. That is a really good thing to do because you get a bit of throw of soil with the knives and that covers up a lot of the residual food that is left in the paddock. You are putting the bait out on top of the soil surface with the mice busting out of their burrows that have been covered up by the seeder. They are getting out looking for food and the first they encounter is the bait on the surface.”

Mr Henry said baiting six weeks out from sowing was a double-edged sword because there was probably a significant amount of alternative food available to the mice.

“Essentially your bait is competing with that residual food for the mouse’s attention. Baiting against that high level of food in the background is potentially less effective, but it still has the effect of potentially taking the top off the population and slowing the rate of increase,” he said.

Mr Henry said another important messages was that if farmers thought they needed bait they should talk to their suppliers early and make sure their suppliers could arrange to have enough bait on hand.

“Every time there is a mouse outbreak there is a shortage of bait,” he said.

Mr Henry will be among a panel of experts providing practical tips on mouse control in the paddock and an update on regional threat levels during a mouse control webinar hosted by the Grains Research and Development Corporation (GRDC) from 12pm to 1pm, Australian Eastern Daylight Time, on Wednesday, March 28.

For more information or to register for the GRDC Mouse Control Webinar, visit www.grdc.com.au/mousecontrolwebinar