ONE OF the oldest flour mills in Australia and accompanying stockfeed mill, Cummins Milling Company, is up for sale after 90-years in operation.

Vendor and mixed famer, Bill Butterfield, who is just the third person to own the business, said now is the right time to hand over the reins.

Established in 1930 by Aubrey Heidenreich, the mill is located in the Eyre Peninsula and operated as just a flour mill before a stockfeed plant was added in the 1960s.

He said it was the stockfeed side of the operation which first introduced him to the Cummins Milling over 10-years-ago.

Mr Butterfield said he breeds thoroughbreds, two of which were being trained by top South Australian trainer Gordon Richards.

“I remember going down there one day and having a chat to him.”

He said Mr Richards was complaining about the cost and availability of horse feed.

From there, Mr Butterfield contacted Cummins Mill and arranged to have grain produced at Butterfield’s large-scale Darke Peak property, processed into feed.

“He knocked me up a batch, 10 tonnes, and I took some down to Gordon.”

Compliments on the health of the horses and their successes on the track drew more trainers to Mr Butterfield’s stockfeed blend.

“The word got around and then I started supplying three or four of the big blokes…and I got going.”

Shortly after seeing success with the stockfeed, the previous owner put the mill on the market, and Mr Butterfield jumped at the chance to take over both the feed and flour enterprises.

“Instead of staying home on the farm, I have been doing this for 10 years.

“It was an opportunity that was too good to miss.

“I could see what opportunity there was in buying this, because I knew how iconic it is.

“In my lifetime, I have got where I am…because if I see an opportunity, I have gone out and had a crack and taken it.”

Mr Butterfield said taking on the mill was not an easy transition, with a lot of machinery, sheds and workspaces needing to be renovated or replaced.

“First of all, we had to bring all the production machinery up to standard.

“It was one of those things where we were having a breakdown every day. 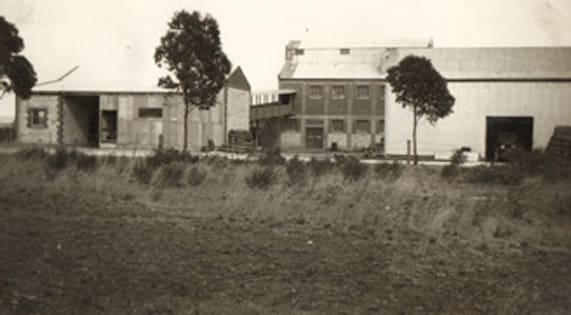 Cummins operations are evenly split between the stockfeed and flour-milling sections.

The company produces a range of flours for households and commercial businesses in 2kg-25kg bags.

It also manufactures specially developed blended flour with additional bran which is supplied to Indigenous communities in the Northern Territory.

“Our best markets are into the supermarkets…Drakes and the other independents, like IGA and Foodland.”

The company also exports products which Mr Butterfield said is in demand due to the high quality of the Eyre Peninsula grain.

The stockfeed mill is heritage listed and produces feeds for all types of livestock and pisciculture at a rate of 4-5t per hours.

There is also the opportunity to expand into new markets, including mineral supplements for cattle and horses.

Cummins Milling Co has an asking price of $4.2M and is being offered by Raine & Horne Port Lincoln. The Cummins Mill offering is just one family operation which is available for sale in South Australia’s Eyre Peninsula.

The five titles cover a mix of arable and grazing land in the Calca, Port Neill and Wanilla districts that are well known for cropping and livestock operations.

All three regions receive reliable annual rainfall, from 330mm in Port Neill through to 560mm in Wanilla, and a total of 1,770ha across the sites is arable, with the remaining land use utilised for grazing.

Within the Calca region near Tyringa Beach, the Chilba lot is the smallest of the aggregation at 335ha, with 275ha of the lot arable.

In Port Neill, the 784ha Coomaba features 665ha of arable land with the balance shelterbelts and grazing land, while the adjoining 601ha Neversweat has 473ha of arable land.

In Wanilla, the 565ha Culmara is suited to cropping and grazing, while the 409ha Koptucka lot has 257ha of arable land.

CBRE Agribusiness’s Phil Schell and Angus Bills are managing the sale campaign on behalf of the landowners, with expressions of interest invited by November 3 and the lots available in one line or individually.

“It’s been an outstanding season in the southern Eyre Peninsula, with excellent rainfall early in the year followed by above-average winter rains.

“The aggregation is also bound to appeal to out-of-district buyers seeking scale and diversification and corporate interest.”

Mr Bills said the emerging sector of carbon farming could also be in the sites’ futures.

“These properties are suited to carbon sequestration, to levels up to eight tonnes per hectare, per annum,” Mr Bills said.

“We’ve received interest from corporate groups seeking opportunities in this space which is adding another layer to the dynamics of farming in South Australia.”