Namoi Cotton CEO John Stevenson addressing an audience at the AGM in Toowoomba this week.

NAMOI Cotton’s ginning operations are now set to finish processing the 2022 season crop by as late as October, according to the updated information presented at the company’s Annual General Meeting (AGM) on Tuesday.

This is after Namoi chief executive officer John Stevenson in April said that ginning of the expected 1.1-1.2 million bales (Mb) would be 95 per cent completed by the end of August.

The late ginning schedule would create an overlap between the Australian crop and the Northern Hemisphere harvest, which occurs between August and December.

Mr Stevenson told the AGM participants at a hybrid event held in Toowoomba that seasonal conditions were behind this change in timelines.

“We are roughly four weeks behind where we would normally be at this time of the season,” Mr Stevenson said.

“We are expecting now to finish ginning in late September to early October.

“It has been an extremely wet season, which has been both a blessing and a curse.

“It has certainly impacted and delayed picking, and cotton quality has been negatively impacted.

“Productivity in this season will be slightly below average, given the high moisture content and the need to run gins slower with more heat and cleaning.” 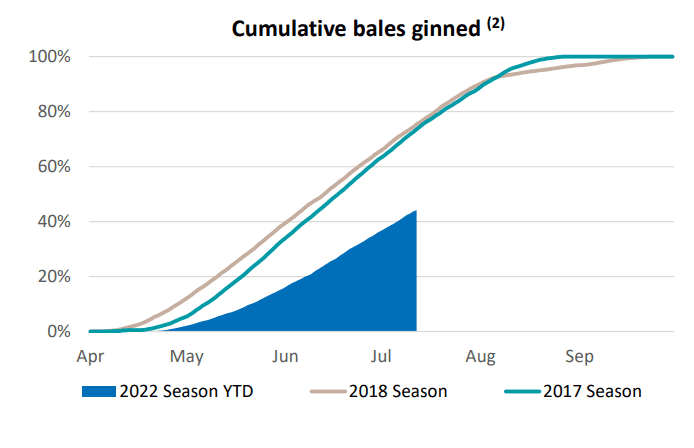 The current percentage of bales ginned this season compared to the 2017 and 2018 seasons. Source: Namoi Cotton

Mr Stevenson said the completion of the equipment upgrades to the Merah North Gin assisted in processing this wet cotton.

“We have completed…the $2.1-million upgrade in drying and cleaning equipment that we have implemented at Merah North Gin.

“This equipment is in use now and it is helping us to process wet cotton at greater efficiencies.”

“Road and rail networks are all congested, and in some cases broken.

“The rail is still disrupted due to flooding in New South Wales and there simply aren’t enough fit and healthy drivers to drive trucks; that’s the reality of the position we are in.

“Everything is moving; it is just taking longer and costing more.”

Mr Stevenson said the network, which features 11 gins in Queensland and NSW, is currently running at full capacity.

Namoi’s estimated ginning volume is about one fifth of the total predicted production for the 2022 season, which sits at 5.6Mb. “There is no doubt that inflation has impacted our cost base.

“Gas, diesel, labour and electricity has all increased substantially.

“Some of that has been passed on to customers, not all, as most of the ginning for the current season was contracted a year ago.”

He said thankfully for growers and industry, commodity prices are high and counteracting these increasing production costs.

He said this preparation was imperative as the 2023 crop is expected to eclipse the current production and reach over 6Mb, according to Cotton Compass June figures.

“Our focus is to remain on execution.

“It is all about the execution…and we remain focused on that for the remainder of this season, and planning now for next season.

“We look forward to the increased volumes in [financial year 2024].” 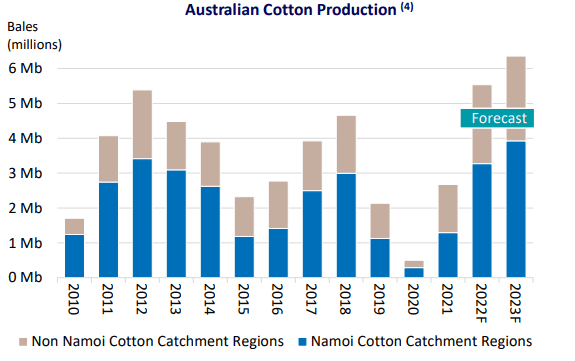 Mr Stevenson said Namoi representatives were continuing to work on projects in the Kimberley, Western Australia and in northern Queensland.

In October 2021 Namoi announced that it signed an agreement with the Kimberley Cotton Company to build and operate a new gin at Kununurra.

Namoi also has a 10pc interest in the company.

“Our team has been working on a design tailored for the unique conditions in Kununurra.

“It has been challenging particularly staying ahead of the inflationary pressures and changes in logistics as we design this project, with the majority of equipment being built and imported from overseas.”

He said more updates will be provided in coming months.

“We have spent a lot of time on the ground in North Queensland visiting growers and local governments.

“There has been a huge amount of support and interest in this project.

“I can say that we have got indicative, in-principle support from the state government and certainly local governments in order to provide support for the infrastructure.

“The key decision factor at this point is whether or not there is enough electricity supply into these remote communities.”

“There is no rejection or objection to putting the investment into these areas, but whether or not the line can handle the amount of electricity is currently being assessed, and that is a six months or so process to come to a conclusion.”

Mr Stevenson said at this stage the North Queensland gin was expected to cost $40-$50 million to construct and it is anticipated that the project would follow a similar financing arrangement as the Kimberley venture.

“The model at this stage, whilst it hasn’t been finalised, would follow a similar pattern of a partnership with growers providing the bulk of equity.”