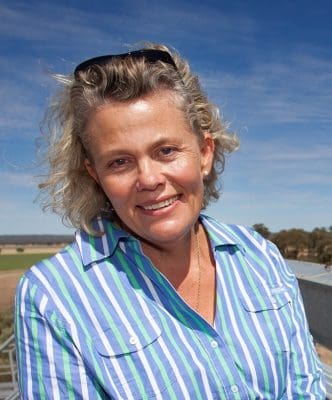 She succeeds Brent Finlay who has served in the role for the past three years.

She and her husband Ed are based on the Liverpool Plains where her family runs a mixed farming enterprise including broadacre farming as well as breeding commercial poll Hereford cattle.

“It is an honour and privilege to represent Australian farmers at the national level and to be elected as the NFF’s first female president,” she said. “To me, it’s a great acknowledgement that women contribute tremendously on farm, along the value chain and increasingly as thought leaders and public advocates for agriculture.”

“My focus will be on developing and advocating for policy that makes farmers better off – not just in terms of what they produce but also reaping the rewards of any increases in value along the food and fibre supply chain.  I also want to make sure that farmers, producers and rural and regional based agribusinesses have access to communications technology that gets them better connected to their customers and allows them to reach out to global markets.

Ms Simson said the NFF had a big agenda for agriculture. Issues such as transport infrastructure, digital connectivity, tax reform, Australia’s energy mix, sustainable development and trade reform would all be issues high on her agenda as president.

“To achieve this agenda, I will be focusing on strengthening the NFF’s capacity to provide a strong and united voice and be the sector’s leader in addressing industry challenges and creating opportunities in the new economy. I also believe we need to work smarter and beyond our traditional alliances, and include other stakeholders and the community in our conversation in ways that are engaging and effective,” she said.

The NFF Board for the next year was also elected at today’s AGM with rice grower Les Gordon elected vice-president. Two new board directors have been elected – NSW grain grower and president of Grain Growers Ltd John Eastburn and NSW Farmers executive councillor and cattle producer Tony Hegarty.

Ms Simson paid tribute to outgoing president Brent Finlay who has served in the role for three years.

“On behalf of the entire NFF membership and broader agriculture and food and fibre community, I thank Brent for his passionate and determined advocacy,” Mr Simson said

“Brent has aggressively pursued policy outcomes that deliver a more productive, competitive and prosperous sector.  He has put the needs of farmers front and centre in arguing for bold reforms to trade and the economy.

“He also led the initial internal soul searching and subsequent ongoing process for the establishment of a new national agriculture sector representative organisation – Australian Farmers – to strengthen the voice of farmers in public policy development and the political debate.

“In all facets of the role as President, Brent leaves an enormous legacy of achievements and a strong vision that I will pursue with as much vigour and determination.”