NEW South Wales is getting an unfair advantage over other states because it still doesn’t have all 20 water resource plans (WRP) in place, which is a central requirement to control water usage under the Murray-Darling Basin Plan (MDBP).

NSW is responsible for around 50 per cent of the total Murray Darling Basin water takes.

He said the lack of accredited WRP for NSW was “the most critical failure of the plan” as the state’s water usage couldn’t be monitored and policed at a similar level to the other MD jurisdictions: Queensland, Victoria, the ACT and South Australia.

“I am concerned, seriously concerned that WRP are not in place across New South Wales after ten years,” Mr Grant said.

“I am the sole enforcement agency for WRP, but I can’t enforce the rules in the plans that don’t yet exist.”

WRP are a major part of the Basin plan and set rules on how much water can be taken or sustainable diversion limits (SDL) and enable the department to ensure compliance and take enforcement action if needed.

Currently, Mr Grant said the NSW Government only has an “administrative agreement” with the Federal Government, instituted in 2019, which enabled a level of SDL accounting.

“These arrangements were supposed to be short term, a short-term fix, until these accredited plans could be constructed, authorised and accountable to law.”

Mr Grant said this deficiency became increasingly clear when his team discovered that NSW had exceeded their SDL by over 30pc in the Barwon-Darling surface water SDL resource unit in 2019-20.

The Barwon-Darling, which flows from the NSW-Queensland border to Wentworth in south-west NSW, again exceeded the SDL in 2020-21 by almost 40pc.

Following the first exceedance, the NSW Government submitted a reasonable excuse claim which was rejected. 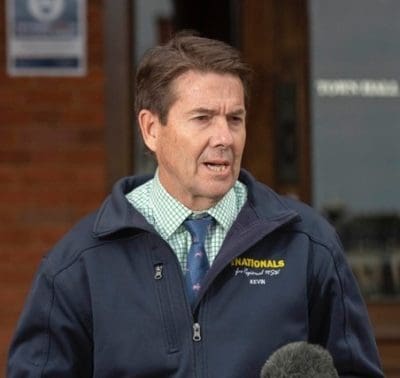 The Government has indicated that it has again submitted a reasonable excuse claim for 2020-21 to the Inspector-General.

“If they were found non-compliant, they may even have to reduce water take in future years.

“As it currently stands NSW are getting a free pass, because they are late with their plans.”

Mr Grant said to reach the level of other Basin states, NSW Government has to submit 20 draft WRP to become accredited.

“NSW have submitted draft WRPs recently for the second time and are committed to submitting all 20 by 30 June.

“I really hope that the NSW Government, especially the NSW Water Minister Kevin Anderson, have produced 20 plans that are capable of accreditation under the basin plan.”

In a statement, Minister for Lands and Water Kevin Anderson said the NSW Government is on track to submit six water resource plans by 30 June.

“I know the Inspector General has a strong understanding of the issues facing irrigators and basin communities.

“I am looking forward to a meeting with the Inspector General, along with the new Commonwealth Water Minister.”

South Bunarba Agriculture manager Sam Heagney, who oversees the northern NSW mixed dryland and irrigation operation, told the conference during a separate session that people should stopping viewing him and other growers in the region as “the devil”.

“We just get up and go to work each day with licences, measuring our water and growing what suits our environment and supporting our communities, just like everyone else in the basin,” Mr Heagney said.

“In a drought, I just don’t know what we are supposed to do when we don’t have anything to give.

“I don’t know how I am meant to fix the Darling.”

Commenting on Mr Grant’s session, Mr Heagney said not having finalised WRP “creates a lot of uncertainty” which only hinders agricultural investment and threatens the viability of regional communities.

“As businesses and communities, we need it locked in, so we know where we are heading; it is really important.” In a plea to expediate the production of NSW WRP, Mr Grant called on the Federal Government and the new Minister for Environment and Water Tanya Plibersek to act.

He said under the Commonwealth Water Act, the Federal Government can adopt WRP created by the MDBA for catchments in NSW.

In a speech to the conference, Ms Plibersek said national leadership is what is required to safeguard the water security and ensure sustainable water management under the MDBP.

“The job remains unfinished, and communities frustrated by a lack of progress,” Ms Plibersek said.

“I am looking forward to meeting as soon as possible with my Basin state and territory ministerial colleagues.

“We will work with Basin governments and stakeholders to put the plan in place as was agreed 10 long years ago.”