One Tasmanian feed plant opens, another on its way 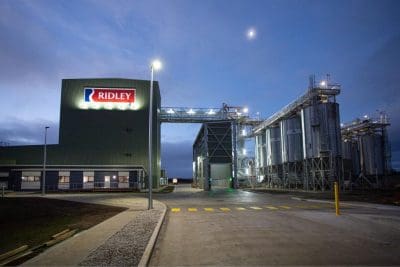 The new facility at Devonport, where it has an existing storage and handling site, will produce pellets and crushed-grain feed mixes, and house an organic line and a bagging line.

It will have a 115,000-tonne annual capacity in addition to an existing silo storage capacity of 12,000t.

With support from the Tasmanian state government and Tasports, Mr Macleod said the company’s new facility was being built to address a lack of grain-processing capability in Tasmania.

“This year in particular, the drought on the east coast of Australia has highlighted the risk associated with the state’s reliance on south-east Australia for grain supply via containers,” Mr Macleod said.

“Previously without pelletised processing capacity here in Tasmania, it’s a high risk to bring in bulk vessels from other states from a biosecurity perspective.

“With approximately 80 per cent of the state’s grain and stockfeed imported from the mainland, the new feedmill will lower the risks and costs currently facing Tasmania’s stockfeed users.”

The new plant is expected to increase demand for Tasmanian-grown grain and pulses, and is due to be completed in October.

It will employ a full-time staff of 15.

The facility has the capacity to manufacture an initial 50,000 tonnes of extruded feeds, including both aquaculture and pet food, with capacity to increase if required.

Customers in Tasmania, mainland Australia and New Zealand will be serviced by the plant, which will primarily service the aquafeed sector.

Ridley received a grant of $2 million from the Tasmanian Government to support the project.

Construction of the facility involved approximately 550 contractors and sub-contractors, and its operation has created around 20 full-time permanent positions.