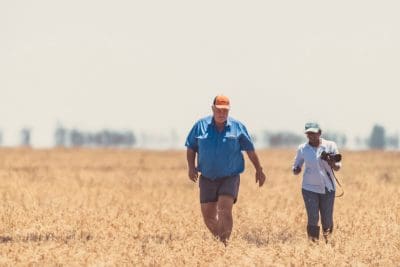 Victorian farmer Craig Henderson and photographer Jenani Therone in a 2018 crop of field peas prior to harvest. Photo: Samy Therone

THE STICK Shed at Murtoa in the heart of Victoria’s Wimmera will reconnect with its grain-industry origins when it hosts its maiden exhibition by Melbourne-based fine-art photographer Jenani Therone.

Entitled Land is Family, the exhibition opens to the public on 27 July, and features fine-art creations by Ms Therone, who since April last year has spent many days in the paddock with the Hendersons, a sixth-generation farming family in Victoria’s Wimmera-Mallee district.

Grain-growing and handling beyond the farm gate, as well as images of the Hendersons at work on the country they farm at Brim, feature in the exhibition’s expressive or abstract fine-art compositions.

“It was really tough for many farmers last year with little rainfall throughout the east coast,” Ms Therone said. Murtoa’s Stick Shed was built in the early 1940s as part of a national expansion into bulk grain-handling. Photo: The Stick Shed

“This brought a whole new life to the idea behind the project, which really shows not only how intense the lifestyle can be, but also the love farmers have for the land and the optimism they possess”.

Ms Therone was previously a dietitian working in Melbourne, and came into contact with the grain industry through her husband’s employment.

“Land is Family celebrates farming and farming communities with creations that challenge presumed visual ideas of the craft of farming”.

“It’s a humble effort on my part to make sure future generations do not grow up thinking a loaf of bread just magically appears on supermarket shelves.”

Stick Shed management committee secretary David Grigg said the committee was excited to be involved with Land is Family.

“After speaking with Jenani and learning why she has embarked on this project, we thought it a very fitting collaboration,” Mr Grigg said.

“It really resonates with the Stick Shed’s association with the grains industry and grain-handling history.”

The Stick Shed was built between September 1941 and January 1942 to store grain from the high-yielding harvest at a time when storages were already full, and was part of Australia’s shift from bagged to bulk grain handling. The roof of The Stick Shed at Murtoa is supported with 56 poles made of mountain ash. Photo: Culture Victoria

The shed is 265 metres long, 60m wide and 20m high at its apex, with the entire roof supported on 56 unmilled mountain ash poles.

Now heritage listed, it can hold about 92,500 tonnes of wheat, and was last used for grain storage during the 1989-90 harvest.

Limited-edition giclée prints of Ms Therone’s fine-art creations will be available for purchase during the exhibition, and half the revenue will go towards funding the preservation of The Stick Shed.

The exhibition can be viewed during the The Stick Shed’s regular visiting times of 10am to 12.30pm Tuesday to Saturday, and 10am to 2pm on Sunday, and admission to it is covered in the shed’s general entry fee.