WITH the bulk of the sorghum and mungbean harvest yet to commence on the Darling Downs, growers across the region are fearful recent torrential rainfalls will impact the value and yield of the mature crops.

Not all southern Queensland cropping regions were hit by the downfall, with mixed totals recorded across the district and eastern properties receiving the highest figures.

According to the Bureau of Meteorology, in the seven days to 9am today, rainfall totals included:

AgForce Grains president and Warra farmer Brendan Taylor said it was difficult to gauge the level of damage in crops, but it is clear that producers have been negatively impacted by the rainfall.

“We are still gathering information and feedback,” Mr Taylor said. 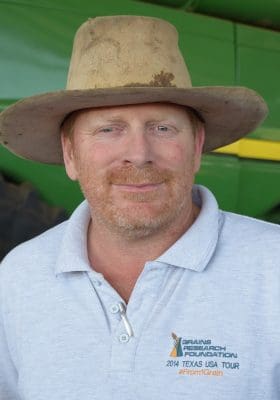 “It’s a mixed bag right across the different regions and a lot of it relates to planting dates for particular crops and what growth stage they were at when it rained.”

He said the rain could not have come at a worse time for growers who were planning to start their harvest.

“The timing of it with ripe sorghum and corn or mungbeans is quite detrimental; that’s what is starting to become evident today.”

He said the sorghum crops most impacted will be those planted in October, whilst farmers who planted in late December and early January will see some benefits from the falls.

Mr Taylor said with only 30 to 40 per cent of sorghum harvested, the bulk of growers will see some damage from the weather.

“The October-planted sorghum is probably the one that is most affected by the rain event,” he said.

Mr Taylor said downgrades in quality due to sprouting will be the highest concern for farmers.

“Largely, the costly impact to this rainfall will be in crop downgrades just from the length of time that it was wet for and the amount of rain,” Mr Taylor said.

“There is definitely sprouting there; it’s just about how bad it is.

“When you get sprouting, the grain starts to germinate, so you lose weight because it uses energy, starches and sugars to germinate.

“You lose yield and then you take the monetary discount as well for having less quality grain when you sell it.”

He said it is the same for mature mungbean crops which will see some level of damage, including his own which were almost ready to be harvested.

“There will certainly be discolouration and worst-case scenario is if they’ve sprouted.

“There could be significant losses there.

“So, about that tonne to the acre mark and at $1300 a tonne there is significant cash there and if they are downgraded severely, you can lose a lot of money quickly.”

On top of downgrade concerns, Mr Taylor said the rain has caused further headaches for growers who were unable to get machinery or trucks on to their properties due to the wet ground.

“It’s going to take weeks for the ground to dry up enough to be able to carry machinery to commence harvest again,” he said.

“Wet ground just eats horsepower, so fuel usage will potentially double for the harvesting operation and that creates a significant expense as well.

“You can’t get trucks anywhere near paddocks, so logistically it makes everything much, much more difficult if you have to drag all the grain out of the paddock to a hard road to load trucks.”

Allora region grower David Peters said he was just days away from harvesting his sorghum which was set to be one of his largest yielding crops.

His property received 176mm which fell in recent days.

“There’s some sprouting and, with the wind, some has fallen down.

“It is a bit heart-breaking when you’ve grown the best crop you’ve ever grown, you’re right at the end really to put a header in and this happens.”

Mr Peters said he expects it to be some time before he can kick-start harvesting.

“It’s extremely wet; it’s probably as wet as you’re likely to see it,” he said.

“It will be some time before we get on the paddock.

“It couldn’t have come at a worst time, but we are not on our own; there will be plenty in the same boat.”

Mr Taylor said despite the rain, he expects to see impressive sorghum yields this season, as indicted by some initial figures.

“The yields that have been coming off are extraordinary in some cases; 7 to 8t/ha has been pretty common and some areas have reported yields as high as 10.

“Extraordinary yields that have been harvested already and good luck to those who were able to get that done before the rain, but no one saw this big weather event coming.”