THE path to building a better connect with urban communities and a multi-tiered approach from government on helping farmers build resilience all factor into a bright future for agriculture which the drought cannot dim. 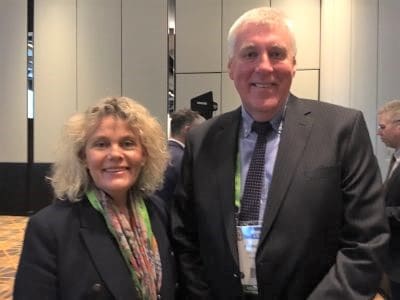 That was the message from National Farmers Federation Fiona Simson in her address to the Australian Grains Industry Conference (AGIC) event which opened in Melbourne today.

Ms Simson used the occasion to make reference to the Telling Our Story initiative launched today.

Ms Simson said Australians continued to support farmers through tough times such as drought and floods and increasingly wanted to learn more about modern agriculture. Telling Our Story was set to play a significant role in this.

She said Telling Our Story was seen as necessary to help bridge the disconnect between city and country which had developed in recent generations, and prompted primary producers to strive for excellence and share their stories.

“There are always going to be questions about the sustainability of the industry,” Ms Simson said.

“We always have to be looking and questioning. How do we improve it?

“Don’t rest on your laurels. That’s my message at the end of the day.”

NFF is working on a program to lift the value of Australia’s agricultural production to $100 billion by 2030, and Ms Simson said that had been tempered by drought .

“It could be a bit of a stretched target. The trajectory is now at around $80b. Now that we’ve got drought, it has taken a bit of a hit.”

Ms Simson and husband Ed farm on the Liverpool Plains of north-west NSW, which last year was harshly affected by drought, and this year has better prospects for a harvested crop.

As grain producers, the Simsons feed into Australia’s grain economy.

“Out of our $60 billion farm-gate returns, $13b this year is grain.  It’s a huge foundation industry for our future.”

Ms Simson said the value of agriculture would rise by creating not just more tonnes but more value at the farm gate, and Australia’s trade agreements could assist in this field.

She said trade agreements waiting to be ratified included Peru and Indonesia, and the agreement with Europe which allowed large tonnages of Australian canola to supply its biofuel sector was also important.

On the domestic front, Ms Simson said while the Federal Future Drought Fund had been welcomed, it was “just one tool”, and a national drought policy would benefit farmers and the economy.

She said her family had been on the farm for 90 years and, like governments, had survived each one, but a more considered approach from policy-makers would be helpful.

“Government has…cobbled together responses at the time but no government has tackled the problem of three tiers of government working together…to tackle drought.”

Ms Simson said a national system for recording weather data could be useful in countering drought pressure, where producers on opposite sides of a state border can currently receive differing levels of support, despite the fact they might be operating within the same scenario.

“There’s a lot of work to do in terms of preparedness and resilience.”

Ms Simson said the recent NSW Government pledge of $2 million to looking at improving drought resilience through the use of multi-peril insurance for primary producers was a welcome initiative.

“Previously, government has demurred from doing anything much in this space.”

She said focus until now had been on cropping only, and the NSW Government funding could look at a system which might suit grain, livestock, dairy and other sectors.

Ms Simson said governments should be prepared to look to other countries for systems which may be effective in building resilience.

“I’m a big fan of not necessarily reinventing the wheel.”