SunRice chairman and rice grower Laurie Arthur expects more than 450,000 tonnes of paddy rice to be harvested this season.

THE largest rice harvest in three years is underway in the New South Wales Riverina where the industry is regaining its feet after drought slashed farm production, created severe product shortfalls and dramatically impacted the processing sector over the previous two seasons.

SunRice chairman and rice grower Laurie Arthur said following two years of extremely low production the company was expecting more than 450,000 tonnes of paddy rice to be harvested this season, more than 10 times the size of the 2020 crop which was the second-lowest on record.

“It’s fantastic to be in a position to bring Australian rice back to the world this year,” he said.

He said SunRice had opened 11 receival and storage sites through its Australian Grain Storage subsidiary, and deliveries were underway.

“The pace growers have returned to rice production shows that it is a perfect fit for the farming systems in the Riverina – and that when growers have improved water availability they can increase production,” he said.

“SunRice is hiring additional employees across its Riverina operations to process the increased crop into value-added high-value branded products, which will be sold to customers and consumers in Australia and many of our approximately 50 global markets.”

A spokesperson for Sunrice said drought, low water availability and extremely high water prices – exacerbated by the impacts of water reform – made rice growing extremely difficult during the past two seasons.

The diminished production levels led to Sunrice restructuring its Riverina operations and dramatically cutting manufacturing jobs at its rice mills in Deniliquin and Leeton.

Panic buying of rice during the COVID-19 pandemic last year virtually cleaned out the domestic supply, forcing Sunrice to adopt innovative ways to source additional international supplies at a time when other countries were putting restrictions on what they were exporting. 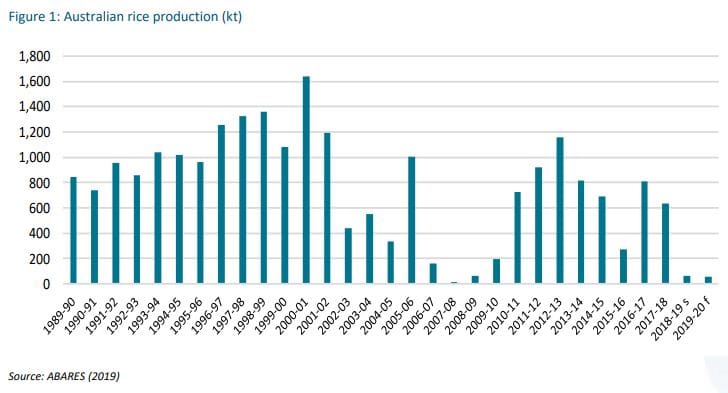 Approximately 56pc of the current crop being harvested was drill-sown under a variety of conditions.

Thirty-six of the 475 growers were seed growers who planted about 1700ha to grow three generations of 10 varieties to ensure pure seed for the next season.

About 77pc of the 2021 crop was planted to Reiziq – a bold medium grain variety. A number of other varieties were planted, including Viand, Sherpa, Langi, Topaz, Doongara and Koshihikari.

The spokesperson said about 290ha of a new variety – V071 – were planted, including 36ha at SunRice’s Rice Research Australia facility near Jerilderie.

“The objective is that this variety will yield higher than Reiziq, will be more water efficient and will be a bold medium grain replacement,” he said.

“The intention is to make it available as a variety for planting for the next season (planting commences in October), subject to market acceptance, milling yield and agronomic potential.” About 36ha of a new variety – V071 – were planted at SunRice’s Rice Research Australia facility near Jerilderie.

Sunrice has produced a series of videos that showcase four rice farming families: