DETERIORATING grain prices are prompting growers in some circumstances to consider the silage option for winter cereal crops, especially as cattle prices have hit all-time record highs over the past three months.

It’s just one contributing factor in what is shaping up to be a significantly larger than normal winter silage harvest across Eastern Australia in coming weeks and months. Barley, and to a lesser extent triticale were the dominant sources, although some oats would be harvested for winter-grown silage this year as well.

But circumstances differed from region to region, he said.

The inner Darling Downs, for example, had been a little drier than the western downs, and obviously NSW.

“Especially on the inner downs, there was a really dry start, so the barley plantings were late,” Mr Schoorl said.

“That may have a slight effect on silage yields, due to the late start, and lesser growth. A rough rule of thumb with winter silage is a potential for a 4pc impact on tonnage, for every week that the crop is planted late. This year, that could mean a 10pc affect in silage yields, in those areas where that applies,” he said.

“Typically for a dryland barley silage program we would expect to see yields of 5-6 tonnes/acre (12.3-14.8t/ha) as-cut. I think Queensland crops will be close to that range this year, whereas in NSW – apart from those regions where crops were flooded – tonnage is going to be way above that. Some of those NSW crops this year will easily go 8-10t/ac (20-24t/ha), as-cut,” he said.

Some areas, such as in the Lachlan Valley, for example, and parts of western NSW down to Coonamble would be impacted by flooding, in places as bad as that seen in 2011, Mr Schoorl said.

“Many silage growers in NSW had a pretty good year last year, but this year will be exceptional in some districts,” he said.

But silage harvest was likely to be delayed a little in some areas, given how wet many paddocks remain.

“Given the last lot of rain that has just come through, I think many silage crops are still 3-4 weeks off harvest. They certainly do not need any more moisture,” he said.

Planting times being equal, the pattern of east coast winter silage harvest generally starts in the northern growing regions, which warm-up first allowing crops to start to mature earlier. A few contract silage harvesters are already started on the western Darling Downs, where some crops were planted earlier.

“But I think the last week in September will see silage harvest operations going flat out across Eastern Australian growing areas, and then extending through to the end of October,” Mr Schoorl said.

“As has happened in the past, contractors will tend to work together in years like this, to make sure winter-grown crops are harvested at optimum time.”

Mr Schoorl said the outlook for winter silage programs just a couple of months ago was still ‘quite modest’, but circumstances had turned around rapidly in the past few weeks.

“Quite a number of growers I’ve spoken to are looking at their barley crop and thinking, I’m not going to take this through to grain – it’s not worth anything. Cattle are worth big money, so more of them are deciding to chop it, and put it away as feed,” he said.

Currently, depending on location and planting time, many barley crops were at ‘boot’ stage, with all the leaves grown out and the heads just beginning to emerge. Ideally, harvest occurs at the ‘soft dough’ stage, allowing it to be direct-cut. 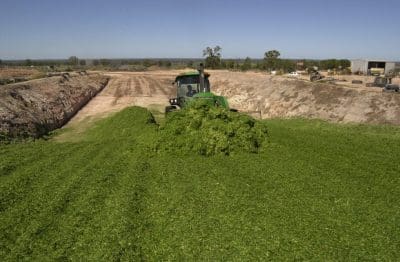 Silage being compacted in a pit on a Darling Downs feedlot

Generally there is a window of about four weeks from where many crops are now, to the soft dough stage. But with winter cereals, as conditions warmed up, crop maturity could move very quickly. Ideal moisture level at harvest was 65-68pc, which tended to happen naturally once crops reached the soft-dough stage.

Mr Schoorl said typically, growers considering a silage option instead of grain were ones who ran some cattle themselves; who had a neighbour who was interested in some backgrounding; or were within delivery range of a nearby feedlot or diary enterprise looking to build silage stocks.

“In a year like this, where cattle prices are so high, silage has appeal for everything from weaners to grower/backgrounder/finisher cattle, right through to breeders,” he said. “Cattle are just worth so much at the moment, it’s worth putting the nutrition into them.”

In the case of feedlot buyers for silage crops, cattle numbers on feed now appeared to be in decline after two years of near record activity caused by drought. While that is reducing the immediate forward demand for silage, there was always a tendency among lotfeeders to build silage reserves whenever the seasonal opportunity arises, as insurance against the next shortage. Large feedlots using silage in rations can maintain storages up to 40,000t in volume.

Mr School said when sizing up the opportunity to divert a barley crop from grain harvest to silage, a rough rule of ‘four-to-one’ applied, meaning a two tonne grain crop could be expected to yield eight tonne as silage. But that yardstick could change, he cautioned.

“A barley grower currently might be looking at $180 or $190/t on farm for grain, and dropping. Silage comes into calculations if it is worth $40-$50/t, standing in the paddock,” he said.

“But with grain prices heading where they are, and the amount of potential silage crops around, I think the lower end of that range is more realistic, based on the 4:1 rule of thumb. But that is very general, and depends what is going on in the local marketplace.”

Non-contract negotiations between winter silage crop buyers and sellers was just starting to happen now, with some early discussions ‘starting around that money,’ he suggested.

Additionally, taking the silage option gave the grower back his country a little quicker, as well as reducing some risk in having the silage crop off, and gone.

Mr Schoorl said some contractors this year had dealt with first-time silage projects, as stakeholders look to build a feed reserve and tap into high cattle prices.

There had been a distinct rise in interest in winter-grown silage across eastern Australia over the past few years, Mr Schoorl said.

That was partly driven by the sequence of dry summers that limited opportunity for summer-grown silage reserves, as well as high demand from feedlots working at capacity during the drought.

“But there is also much greater recognition among users now that winter cereals can make really good quality silage – very palatable and generally higher in protein than what summer crops can offer. Whole-crop barley silage can often deliver 12-14pc protein. When it comes to backgrounder cattle, which need slightly higher protein levels, winter-grown silage is ideal,” he said.

Lotfeeders and others were showing increasing interest in winter silage over the past few years. The North Australian Pastoral Co’s large Wainui feedlot neat Dalby, for example, did its first-ever winter silage program last year.

“Summer-grown silages will continue to be the primary target, but users are now seeing winter-grown silage as an important secondary option – and a ‘second chance’ in those dry years,” he said.

Grain Central asked Mr Schoorl for some key points to consider when managing a winter cereals silage program. Here are his responses:

Cereal crops, because of their hollow stems, can lose moisture very quickly once they approach harvest stage. “Unlike a summer-grown corn or sorghum plant that holds a lot of moisture in its pithy stem, a cereal plant can mature-out very quickly, especially moving into a period of higher temperatures and longer daylight hours. “That means they need to be monitored very closely. Consult with your contractor leading up to harvest – they know what’s going on.”

Leaving a crop just a few days too late reduced its ability to compact well in the pit. Lower densities in the silage pit leads to poorer fermentation, more spoilage and poorer quality silage.

For the reasons listed above, using a good quality high-performance inocculant (he recommended Lallemand’s Lalsil product) was critically important, to provide aerobic protection at feed-out time.

“From past experience, 95pc of the winter cereals going into silage program will be treated that way this year,” he said.

With silage stocks likely to be high leading into summer after a large winter harvest, Mr Schoorl says it will be interesting to see what eventuates in terms of a summer grain/silage crop decisions.

“With the extra rain that’s been around, there will be good soil moisture reserves, which suggests some early summer crop will go in for silage. But it will be interesting as to how much more summer silage gets grown, given the reserves now in the pipeline, and the potential for reduced demand from feedlots and other users. But grain sorghum is unlikely to be a popular option, given where the prices are going.”